The Nintendo NX “Could Be Huge”; Gamestop Compares NX Potential To Prior Nintendo Consoles

Retailer Gamestop has released its earnings presentation for the 1st quarter of 2016, and in the presentation the retailer compares potential NX incremental sales to prior Nintendo consoles.

The chart presented by Gamestop, details opportunities for industry growth, and based on data from several sources, provides an estimate of incremental NX sales over the first two years compared to Wii and Wii U sales in the US addressable market. 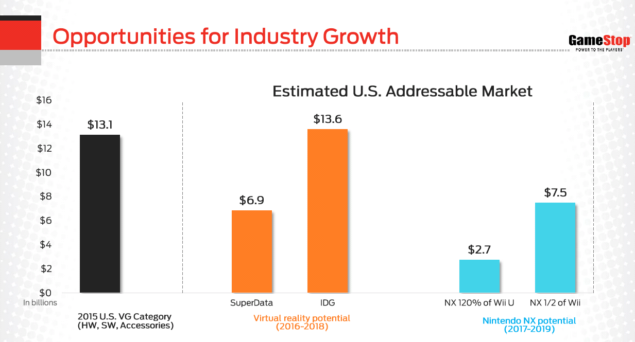 Should the new NX perform only slightly better than the Wii U, it would still generate $2.7 billion of incremental sales over the first two years. Should it perform at even half of the level of the Wii, it would generate $7.5 billion in incremental sales over that timeframe. You can of course apply GameStop's average market share to estimate the impact on GameStop sales. While it is too early to offer definitive projections, we are monitoring this situation closely in terms of product availability and features, consumer awareness and purchase intent. We plan to provide an update each quarter”, said Gamestop’s EVP of Strategy and Business Development, Mike Hogan, during the company’s earnings call.

Hogan also took to Twitter to express that the Nintendo NX “could be huge” based on these projections.

During Gamestop’s earnings call, analyst Ray Stochel from Stifel Nicolaus, asked about the rumors that Nintendo would be shifting back to cartridge-based games for the NX.

Hi, guys, this is Ray Stochel on for Dave. Good afternoon. What level of insight can you share on rumors the new Nintendo console is shifting from disc-based games to cartridges? And if you can't specifically comment on that, can you discuss any historical economic differences between cartridges and discs for the pre-owned business?

We saw those rumors, and so obviously we can't comment on them. I don't think we know anything about it anyway.

But certainly for us, physical media is a good thing, right? As far as the historical, guys, anybody have any thoughts on that?

I don't remember anything distinctly different between economics of pre-owned whether or not it was disc or cartridge based. Mike, do you?

The only difference would be on the refurbishment and pre-owned side. And actually, cartridges are much simpler to refurbish and repackage. So there is somewhat a little bit of an advantage if it went in that direction on used.

But it is early, guys, and we have got to all keep cool heads. Certainly I would say that the fact that there are rumors of that type just confirms for you that this is an important console for next year. It will have physical media, we will play a role in it, our pre-owned business will also play a role. So we're excited about that.

And of course we love Nintendo IP. So it's all good news.

Do you expect the NX to be a success? Do you believe that Nintendo will be shifting back to cartridges for their games? Hit the comments.