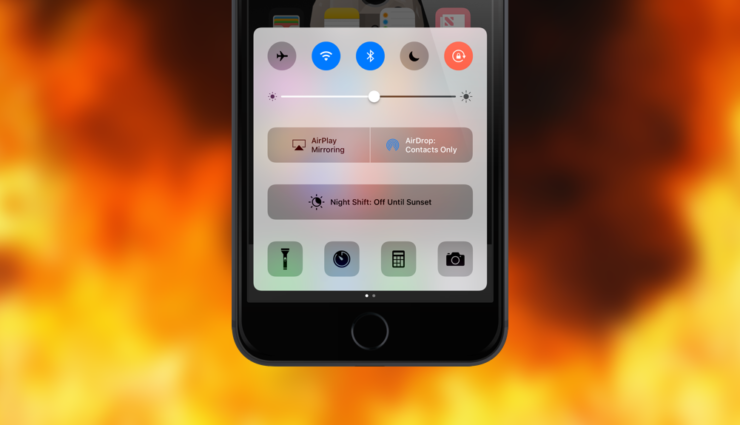 A new bug has been discovered in iOS 10 Control Center that will crash an iPhone completely. Here's how you can replicate it yourself, or on someone else's iPhone if you so wish.

Regardless of anyone's best effort, software can't ever be bug free. Same is the case with Apple's iOS, where we end up seeing a new kind of bug on an occasional basis. Thankfully, those bugs are eventually patched up by Apple with every new release of its mobile software. However, the latest bug, originating from the iOS 10 Control Center, has managed to slip past under Apple's radar up until the latest iOS 10.3.2 beta.

The bug, once it kicks into action, will crash your iPhone completely, freezing everything up that's in view. In order to get out of the freeze cycle, you have to force reset your iPhone by holding down the Power + Home buttons simultaneously until you see the Apple logo on the screen. iPhone 7 and iPhone 7 Plus users have to press the Power + Volume Down key combination for a hard reset.

In order to replicate the bug, simply bring up Control Center, and using three fingers, press either one of the apps in the bottom most row, AirDrop and one of the top-most toggle switches. Remember, there's no guarantee that you'll be able to replicate the bug in the first go. And if you are having trouble doing so, then it's best to check out the video below for further clarification.

Since this 'issue' has been highlighted on a grand scale, it's likely that Apple will patch it in a future iOS release. There's a chance that iOS 10.3.2 final would be that firmware release. Even if it's not, we will keep our tabs on which one it's going to be.

This bug will likely not turn into a security risk, until or unless someone turns it into one. However, once your friends get to know about it, don't be surprised if they hand you over a potato iPhone with a wide grin on their face.