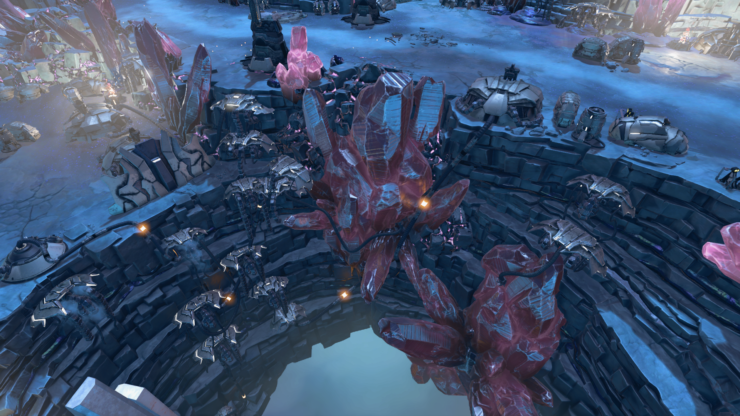 A new Halo Wars 2 update is being released today alongside a service-side balance update once the update is deployed.

Going live today, the new update will include changes to the game’s interface, AI, audio, art, buildings, and units. Additionally, the update will also introduce multi-GPU support on Windows 10. Down below you’ll find the full patch notes. Please note that the service-side balance changes aren't included in these notes yet.

In addition to the notes below there will be a service-side balance update released after the game patchhas been deployed. The details of these additional balance changes are NOT currently included in the notes below. We will update once that information is finalized.

Fog of war made more readable

Improvements to camera scroll speed and feel when playing with a controller – regular scroll is noticeably more responsive, and fast scroll (holding LB) gives a much larger speed boost

Hid player gamertag and rank in the map load screen

Shield Generator stacking reduced per generator from 50% efficiency to 20%

Hunter Captain no longer receives as much healing from Combat Repair

Upgrade 3 for Vehicle, Air, and Infantry apply the correct amount of health to appropriate units

Skitterer health from Vehicle Upgrade lowered at all levels

Spartans no longer become unresponsive when slamming a teleport pad

Units will now auto attack garrisoned units as they walk past

Decimus can now use Y ability on buildings

Veteran Blisterbacks can once again be healed to full

Shipmaster’s Grunt squad leaders are now rightfully Sangheili instead of Jiralhanae, and now can be upgraded to cloak instead of having Shrapnel Mines

Normalized damage of hijacked vehicles regardless of who made the vehicle

Atriox Fortifications slightly reduced in effectiveness at level 1, and greatly reduced at level 2, and is specifically less beneficial to shield generators

Scorch Mines can no longer blow each other up on deployment

Fixed an issue where the “Graphics Driver out of Date!” message could refer to an incorrect driver version in some cases

Fixed a desync that could happen in 3v3 Strongholds

Fixed a crash that could occur when loading saved games

Up to two GPUs are supported

This implementation of Multi GPU synchronizes data between the two GPUs. Running at 4K resolution and higher-quality graphics options may exceed the bandwidth available to synchronize the cards, which may cause in-game performance issues.

Updating to the Creators Update of Windows 10 is strongly recommended

Make sure you’re on the latest graphics driver

Art:
Fixed graphical corruption that could appear near wraiths in campaign

Mantis chaingun effects have been cleaned up

Decimus’ Siphon no longer leaves green effects on the units

Added some audio to the Cyclops death animation

Anders sentinels will no longer play Grunt audio upon death

Johnson’s EMP should no longer cause audio to stutter

Last, but not Least:

Players affected by earlier issues with loss of progress will have their progress restored, based on their halowaypoint.com Service Record

Halo Wars 2 is available now for Windows 10 PC and Xbox One.