Previously, we reported that MX5 Pro Plus will feature Samsung’s Exynos 7420 and a 41 MP rear camera sensor. Well, it turns out that the upcoming smartphone is not going to be sporting an Exynos 7420, but something far more capable than that. Want a hint? The chipset will still be made by Samsung.

MX5 Pro Plus Leaked To Feature Exynos 7422, Along With Support For A MicroSD Card Slot

The leak came all the way from China, and seeing as how Meizu already impressed us with its MX5, we expect the Chinese OEM to really knock our socks off with its upcoming flagship smartphone, MX5 Pro Plus. Exynos 7422 was originally rumored to be present in Samsung’s Galaxy Note 5 and now that we have come to terms with the Exynos 7420 present inside the flagship phablet, we will be hoping that MX5 Pro Plus will not disappoint us in this particular department.

In addition, the smartphone is also going to be sporting 4 GB of RAM, although the leak did not care to specify which speeds the amount of RAM will be running at. Moving on, it is also stated that we will be seeing a MicroSD card slot on the smartphone, with a storage expansion limit of 128 GB. Since MX5 did not provide support for such a crucial feature, we hope that the leak turns out to be true and Meizu incorporates one. 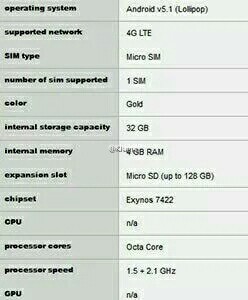 While Exynos 7422 is undoubtedly better than Exynos 7420, surprisingly, the clock speed of the octa-core CPU will remain the same. According to the image, Exynos 7422 is going to be running a quad-core running at 2.1 GHz, while another quad-core will be running at 1.5 GHz. This is the same configuration that is running in smartphones like Galaxy S6 Edge Plus and Galaxy Note 5. However, since the leak does not specify which cores will be used, so we have high hopes that a Cortex-A72 quad-core will be present.

Unfortunately, there was no mention of a release date, although in our previously published leak, we did mention that the handset would carry a price of $483. Let us hope that MX5 Pro Plus is released before the end of 2015 since we really want a smartphone of Chinese origin to duke it out with flagships like Galaxy Note 5 and iPhone 6s.