Over at Gamescom, MSI displayed their latest X99S Gaming 9 AC and X99 SLI Plus black motherboards which will be featured in their X99 lineup consisting of four products. We all love the new X99 chipset even though most of us don't even have the money to but a system based on the X99 chipset but we should appreciate motherboard makers to deliver new innovations and features in the high-end PC desktop sector. 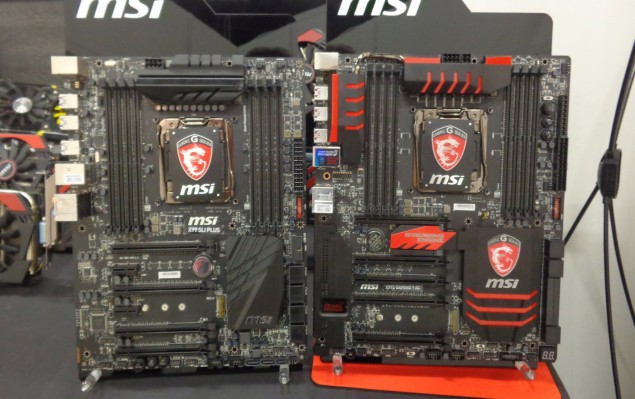 At the booth, MSI's Channel Marketing Manager, Dirk Neuneier, displayed and detailed two of the upcoming X99 based motherboards from MSI which include the X99S Gaming 9 AC and the X99 SLI Plus Black. The other two X99 products include the X99S XPOWER AC and a fourth product which is yet to be showcased by MSI and could have to do something with the M-ATX form factor which we saw from EVGA and ASRock recently or the X99 GD65 sample they showcased back at Computex 2014. The X99S Gaming 9 AC is termed as a flagship Gaming board while the XPOWER is the flagship overclocking board. The X99 SLI Plus Black edition which is the perfect aesthetically pleasing board for enthusiasts is termed as a standard design for the X99 platform so it could cost around the $250 US range which makes it a pretty decent entry in the X99 line considering it still packs a ton of features.

Starting with the design scheme, the MSI X99S Gaming 9 AC sticks with the red and black color scheme which MSI has implemented in their Gaming series brand along with several other manufacturers who are using the same scheme. The motherboard has three sets of heatsinks, two along side the VRM, PWM and one on the PCH. The LGA 2011-3 socket is compatible with Intel’s upcoming Haswell-E processors which will be available in retail by this month’s end if reports are true or we will see them in the first week of September. The board features an 8 Phase PWM supply fitted with MSI’s Military Class IV components and powered by a 8+4 Pin power configuration. The LGA 2011-3 socket is coupled by eight DDR4 DIMM slots, four on each sides which can support overclocked DDR4 memory sticks on-the-go.

Since MSI has featured their Military Class IV components, they also use the OC Engine, Power On/Off and Reset switches which come in handy when overclocking this beast of a board. The X99 Express Chipset is seated beneath a large Gaming G-Series heatsink. The heatsink itself resembles a shield with a second shield engraved as a logo in the middle. Expansion slots include five PCI-Express 3.0 x16 slots which storage includes 10 SATA 6 GB/s and two SATA Express ports. A small diagnostic LED is located at the bottom right hand corner of the board. Now the most interesting feature about this motherboard is that it houses a streaming engine which featured an AVerMedia chipset to allow 1080P live streaming at 60Mbps bitrate which is quite impressive considering it will take the load off the GPU and ensure you get the fastest performance out of your hardware.

Since this is a gaming tier board, MSI will not compromise on additional features and include their Audio Boost ALC 1150 powered chipset and Killer E2200 LAN chip for better audio and networking while a large thermal armor will run across the I/O and audio isolated PCB section for better thermals. In addition to the PCI-E ports, MSI has also added an mSATA SSD slot at the top of the bottom most PCI-e slot for NGFF SSDs. MSI also teased the I/O of the board a while ago featuring a full matte black cover with red I/O ports that include the PS/2 port, 8 Super Speed USB 3.0 ports, 2 USB 2.0 ports, LAN port, 802.11 B/G/N/ AC antenna connectors and a 7.1 Channel audio jack. A USB 3.0 header is also located near the SATA ports for front USB panel. The pricing on the MSI X99S Gaming 9 AC motherboard is not known but we can see this retail at a price above $399 US or vastly greater than its Z97 counterpart. Expect more details on MSI’s next generation X99 chipset motherboards later on. 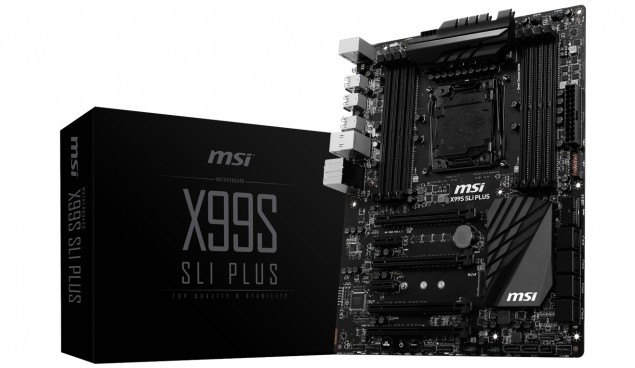 The MSI X99S SLI Plus motherboard comes with an 8 Phase PWM supply fitted with MSI’s Military Class IV components which include military grade capacitors and MOSFETs. The LGA 2011-3 CPU socket is surrounded by eight DDR4 DIMM slots which will be able to support overclocked memory up to 3000 MHz+. The motherboard has a beastly design that is incorporated in a ATX form factor. Both black colored heatsinks cover the VRM and X99 PCH featuring a distinct design scheme. Storage includes 10 SATA 6 GB/s ports and a single SATA Express port at the bottom left corner of the board. There’s a USB 3.0 right-angled header right next to the storage outputs. Power is provided through a single 8-Pin connector and the regular 24-Pin ATX power connector.

Expansion slots include four PCI-e 3.0 x16 slots and two PCI-e 3.0 x1 slots for quad-way SLI and CrossFireX multi-GPU support. Since this is a targeted motherboard for SLI, it will be optimized for dual-GPU operation. Bottom of the slots, we can spot a OC Genie, Power On/Off and Reset switches. The I/O panel is bundled with many ports which include USB, PS/2, Gigabit LAN. MSI has used an 8 Layer PCB which provides stability and more bruteness to the design itself. The packaging is also great and simplistic and we can’t wait to test this out ourselves once Haswell-E hits the road.

The MSI X99S XPOWER AC is featured in MSI’s flagship XPOWER Overclocking product brand which is aimed at overclockers and enthusiasts who demand nothing less than the best. The picture says it all with the motherboard enveloped in a layer of ice which shows off that it is focused towards LN2 overclockers. The motherboard has a beefy design and comes in the E-ATX form factor, something which the past XPOWER series motherboards have followed and its great to see MSI keeping the traditional alive and updated. The MSI X99S XPOWER AC features the traditional yellow and black color scheme of the XPOWER motherboards.

The board packs the LGA 2011-3 socket that is powered by dual 8-Pin connectors. Considering the X79 Big Band XPOWER II came with a 22 Phase PWM given the space restriction on these boards, the X99S XPOWER AC can feature a 24 or 12 Phase DIGITALL Power VRM, providing unparalleled amount of overclocking performance and stability to the motherboard featuring an 8-Layer PCB design, Military Class IV components with solid state capacitors, Hi-C Caps, Super Ferrite Choke while the DARK Cap on the other hand features a core design made of aluminum with a lower ESR and a life space of 10 years. MSI’s boards also use the Super Ferrite Chokes which run 35 degrees cooler, have 30% higher current capacity with 20% improvement in power efficiency and offering stability. The CPU socket is surrounded by four DDR4 DIMM slots (four on each side) which will be able to support overclocked memory beyond 3000 MHz. The first generation of DDR4 memory will feature traditional speeds of 2400 – 3000 MHz at 1.2V but as the memory design matures, we will be looking at faster DIMMs with speeds beyond 4 GHz frequency.

Expansion slots include five PCI-e 3.0 x 16 slots with ample spacing in between them to support 4-Way SLI and CrossFire graphics cards. There’s also a single PCI-e 3.0 x1 slots and a mSATA Connector to support the latest NGFF solid state drives. A 4-Pin PEG connector is place at the bottom of the board to supply additional power to the PCI-Express lanes when using multiple cards. Right next to the DDR4 DIMMs, we can spot several overclock swtiches which include OC Genie, Power On/Off, Voltage Adjustments, BCLK Increase/Lower buttons and V-Check panel to measure voltages during overclocking sessions. A diagnostic LED is fitted on the top right corner. Storage includes 10 SATA 6GBps connectors include two SATA Express ports while there’s also a right angled USB 3.0 port and two USB 2.0 ports and an additional USB 3.0 port near the bottom side of the motherboard.

The cooling design is off the charts with four sets of heatsinks which feature heatpipe interconnected through each set transferring heat for better load dissipation. The middle heatsink has the XPOWER logo while the PCH heatsink is large enough for the X99 chipset so its may be housing other components beneath it. We can’t be so sure as to what these components might be. The strikes of yellow color on the motherboard along with the XPOWER lit up since they feature a small LED beneath them to give a nice effect. We have already seen this on the Z87 XPOWER and MSI is following the same with the X99S XPOWER AC motherboard. The board features the Audio Boost 2.0 technology featuring an ALC 1150 codec which is isolated on a separate PCB. 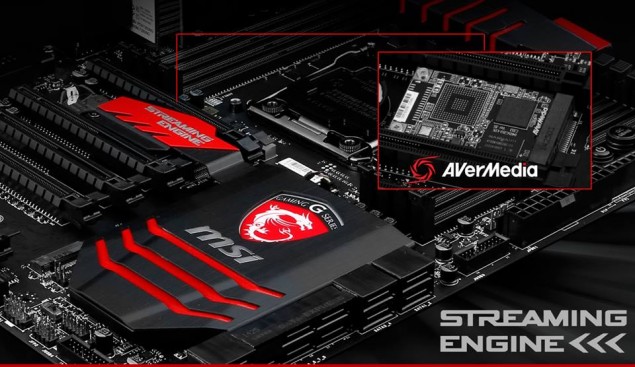 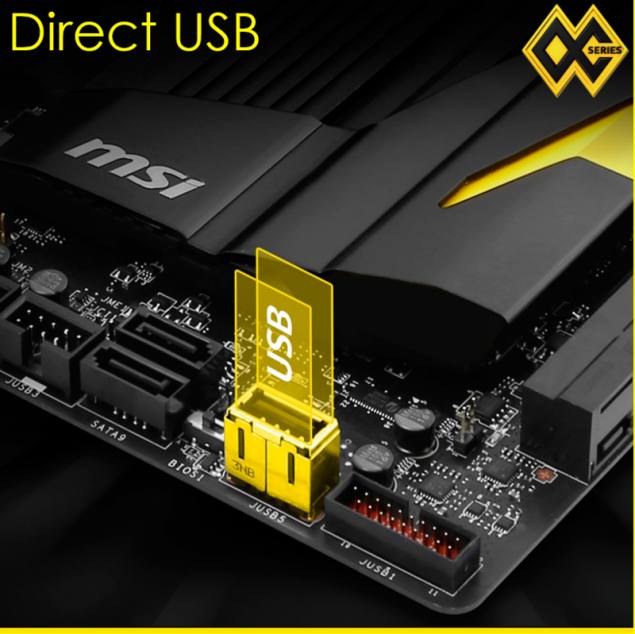