With the launch of Skylake processors closing on us, we are looking at more and more leaks of Z170 chipset based motherboards. The latest boards we have for you to feast your eyes upon is MSI's flagship and totally enthusiast targeted, Z170A XPOWER Gaming Titanium Edition motherboard. The new motherboard that will launch on 5th August will feature a fully loaded design that is geared towards overclocking the latest 6th gen Skylake K-Series processors. 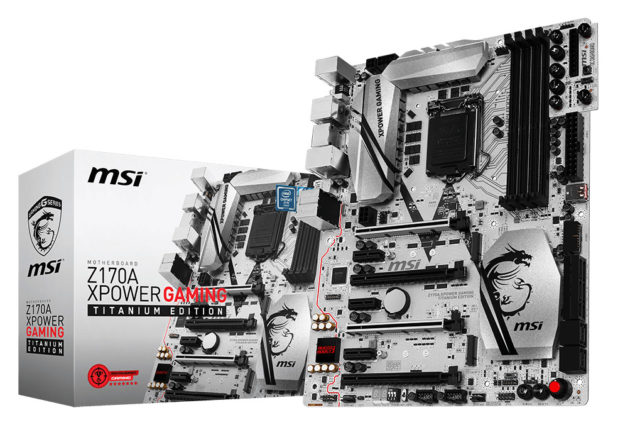 Starting off with the design that is a step away from the traditional black and yellow color scheme we found on MSI's OC lineup, the Z170A XPOWER Gaming Titanium Edition packs a neat white and black color scheme that's looking really great on the high-end motherboard. The motherboard is purely designed for the hardcore gamer audience that want best stability and best features that motherboards can deliver to them. The motherboard is also suited well for overclockers. Talking about the design scheme, the motherboard sticks to a ATX form factor and the heatsinks have a rough metallic texture which goes well with the Titanium branding on the product.

The MSI Z170A Gaming motherboard features the LGA 1151 socket that will support Intel's 6th generation CPU that arrive on 5th August. The socket is powered by a 8-Pin plus 4-Pin power configuration while the board is fed power through a 24-Pin ATX connector. The socket is surrounded by a 16 Phase PWM that features the new Titanium chokes, ensuring higher efficiency, longer life cycle and better overclocking, This along with the latest black capacitors are part of MSI's Military Class V components which deliver top quality. The PWM is cooled off by two sets of heatsinks that are interconnected with a heatpipe to transfer heat load. There are four DDR4 slot located on the board which come with MSI's DDR4 Boost technology that automatically adjusts DDR4 clocks with the clock of a button. Next to the DIMMs is a new tool called MSI OC Dashboard.  This dashboard can be manually equipped on the board to offer CPU tuning and several OC essential buttons. This is similar to MSI's previous XPOWER boards but only this is an enhanced PCB that is bundled with the board and can be easily removed when not needed.

There are voltage read points along with other tuning buttons that include Easy Button 3 (Power On/Off/Reset) , a complete Discharge switch, CPU Ratio OC +/-, BCLK OC +/-, Slow Mode and a Go2BIOS switch. Expansion slot include two PCI-e 3.0 x16, two PCI-e 3.0 x8 and three PCI-e 3.0 x1 slots. There's a 6-Pin power connector that is used to add more power to the slots when the motherboard is loaded. We can't tell if there's a PLX chip hidden beneath one of those heatsinks but it means that the extra PCI-E lanes should not be needed even though the Z97 XPOWER did feature one. Other expansion slots include two M.2 slots. For storage, there's 8 SATA III 6 GBs ports, two SATA Express ports. Two USB 2.0 connectors, a right angled USB 3.0 connector and a USB 2.0 port is found internally on the board.

The latest Audio Boost 3 system powers a 7.1 channel audio jack with SPDIF. Rest of the rear panel I/O includes two USB 2.0, 6 USB 3.0 ports, a PS/2 Gaming port, LAN port, two HDMI display connectors and a single Display port connector. Pricing for this motherboard would be above $299 US limit. Aside from the Z170A XPOWER, we have also covered high-end motherboards from other manufacturer's such as Gigabyte's Z170X SOC Force, EVGA's Z170 Classified, ASUS's Z170 ROG Maximus VIII Extreme and ASRock's Z170 OC Formula. We will let you know of more motherboards as soon as we get additional information.