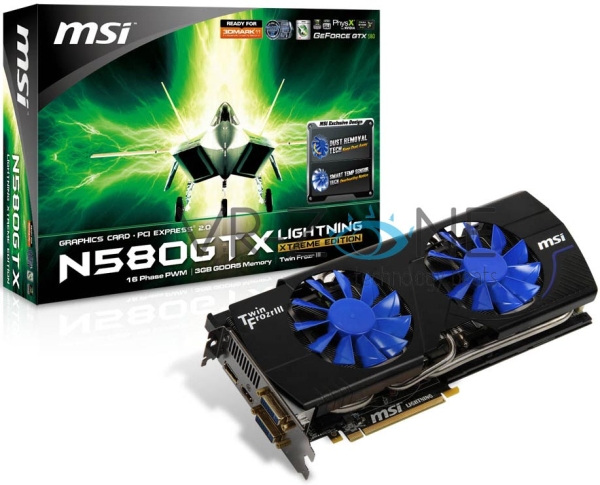 MSI has detailed its upcoming Geforce GTX 580 Lightning Edition Graphics card. Based on the GF-110 core which is a refined version of the GF-100 featuring better performance while consuming lesser power. The card features unprecedented DirectX 11 Performance and uses a 3GB memory instead of the 1.5GB on the stock variants of GTX 580. It also uses MSI's top of the line Twin Frozr III Cooler.

The Card would come with a Factory Overclock supporting 3GB memory along a 384-bit wide GDDR5 memory interface and holds 512 Cuda Cores. A 16 phase power design and High quality capacitors and power components make it a damn good overclocker for High end enthusiast users. A new technology Smart Sensor would be included which would detail temps on different parts of the GPU's while overclocking.

The MSI Twin Frozr III heatsink is the coolest thing about the card featuring a large aluminium heatsink with a copper base plate dissipating heat to the surrounding heatpipes which are then transferred to the huge aluminium array and cooled by two blue colored high performance silent fans. The card would be released on Computex 2011 event next month.