MSI has been slowly foraging into the black aesthetics but this is the first time they have featured a single color All-Black motherboard. The color is reminiscent of Black Gold and is a more deeper black than anything else I have seen, including ASUS's X79 Black and EVGA X79 Dark. This aesthetic is very unique because cool black shade extends not only over the PCB but over all the components as well. Something that hasn't really been spotted before. 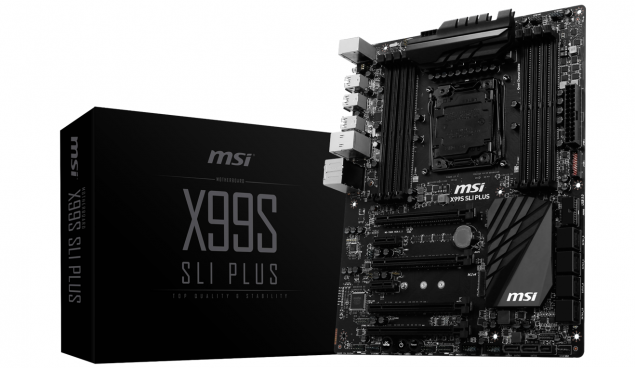 To sum it up, The MSI X99S SLI Plus motherboard comes with an 8 Phase PWM supply fitted with MSI's Military Class IV components which include military grade capacitors and MOSFETs. The LGA 2011-3 CPU socket is surrounded by eight DDR4 DIMM slots which will be able to support overclocked memory up to 3000 MHz+. The motherboard has a beastly design that is incorporated in a ATX form factor. Both black colored heatsinks cover the VRM and X99 PCH featuring a distinct design scheme. Storage includes 10 SATA 6 GB/s ports and a single SATA Express port at the bottom left corner of the board. There's a USB 3.0 right-angled header right next to the storage outputs. Power is provided through a single 8-Pin connector and the regular 24-Pin ATX power connector.

Expansion slots include four PCI-e 3.0 x16 slots and two PCI-e 3.0 x1 slots for quad-way SLI and CrossFireX multi-GPU support. Since this is a targeted motherboard for SLI, it will be optimized for dual-GPU operation. Bottom of the slots, we can spot a OC Genie, Power On/Off and Reset switches. The I/O panel is bundled with many ports which include USB, PS/2, Gigabit LAN. MSI has used an 8 Layer PCB which provides stability and more bruteness to the design itself. The packaging is also great and simplistic and we can't wait to test this out ourselves once Haswell-E hits the road.

Now this motherboard is not only good looking but full of features as well. The CPUs that are going to sit in that socket have a TDP of 140W and thanks to the IVR (Integrated Voltage Regulator) you can expect a rock solid supply to the die for overclocking. AVX 2.0 Instruction set is supported. The motherboard features the OC Genie technology. I cant make out the Audio Codec because the picture isnt that high res but boy does the mobo look good. The one thing I really like is that unlike previous ventures into All Black motherboards where many of the components and capacitors remained of different colors, you have a very strict and religiously followed black scheme here. This new devotion to the Black Gold aesthetic makes the old attempts look almost untidy in comparison. Needless to say, if you are going for a super high end build, you are going to want to keep an eye out for this motherboard. MSI is launching X99S SLI Plus motherboard on the 29th of August and rumor has it, along with 7 other X99 Motherboards.