Update - MSI has contacted us that the bug has been fixed through a new BIOS that was rolled out at the start of this month. The issue was related to AMD drivers and MSI's double PWM fan control system on the TriFrozr graphics cooler. For those running MSI's Radeon R9 290X Lightning, you can download the following BIOS file and update your cards using the LiveBIOS utility to ensure optimal performance.

[Report] At Hawaii's launch there were multiple jokes about it running too hot. Well, if you are an MSI R9 290X Lightning owner then the joke might become a harsh reality for you. It turns out that a bug that ails only the 290X Lightning's stops both side fans from working, causing severe heating issues. We were first notified of this critical malfunction by reader Greg Mann and a simple forum search revealed that the problem was rampant in practically every MSI Lightning (R9 290X) out there. At the time of writing, AMD has been notified of the problem. 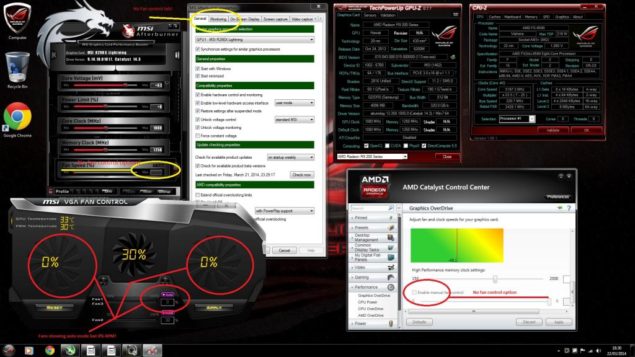 Thankfully however, from what we can see in the forum responses at least, all owners noticed the problem quickly enough and stopped any GPU intensive activity while downgrading to a safe Catalyst version. It is worth noting here that the Catalyst 14.3 is a BETA driver and AMD has warned about bugs like this on practically every documentation available.  However from a cursory glance this issue has been prevalent in even 14.2 BETA drivers. Here is the hierarchy of the problem:

However, it seems that the Lightning's safety mechanisms are still working and causes the R9 290X to crash when overheating past a critical value; although even that wont save the card if it is repeated extensively. One thing is for sure though, if you are the owner of an MSI R9 290X Lightning then be sure to downgrade to a lower Catalyst till AMD fixes the bug. This is exactly why the version preceding BETA drivers is called the 'stable version'. If we hear anything from AMD apart from an acknowledgment we will let you know.