Press Release - MSIs AM3+ mainboards support the latest AMD Vishera processors. In support of this fact is the recent overclocking record on the MSI 990FXA-GD80 which hit the 8.37 GHz mark with an FX-8350 processor, making it the fastest AMD FX-8350 in the world.

Additionally, the Z77 MPOWER and Big Bang-XPOWER II Mainboards have both made significant advancement in the HWBOT over-clocking leaderboards with MSI Lightning graphics cards. T0LSTY from Ukraine scored 18103 which puts him at the top of 3DMark 11 Performance Single Graphics Card scores with a Z77 MPOWER and R7970 Lightning and was the first contestant to break the 18,000 Marks barrier! T0LSTY, not satisfied with one record, also claimed the top spot in the Unigine Heaven DX11 single card benchmark.

OC_Windforce from Korea chose the Big Bang-XPOWER II and R7970 Lightning to secure his first place at the 3DMark 11 Performance Dual Card top and crowned himself with a Z77 MPOWER and R7970 Lightning in the Unigine Heaven DX11 dual card rankings! All those brilliant over-clocking achievements reflected the superior optimization ability of MSIs RD teams and performance of high quality mainboards and graphic cards from MSI continue to provide record-breaking performance in the most difficult and extreme over-clocking challenges.

Its CPUID validation can be found here. 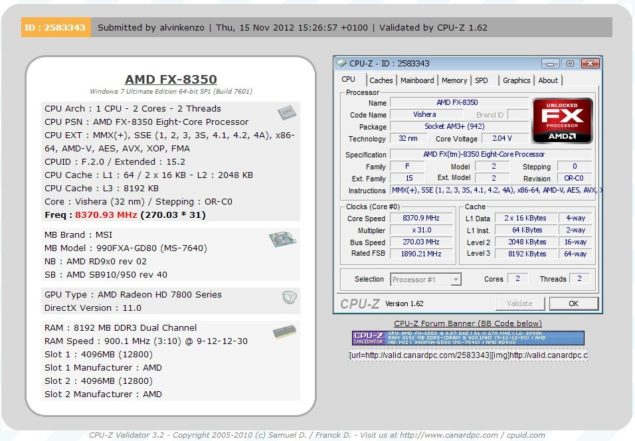