Motorola has done the unthinkable by releasing not one, but three smartphones which include Moto X Style, Moto X Play and on a more affordable note, the latest Moto G. Coming to the company’s balanced Moto X Play, the device might not pack as much firepower as Moto X Style, but it is still a very capable handset when you want to demand processing power, battery life and a ton of features in a mobile computing package. Let us take a look at the hardware specifications that make up the balanced Moto X Play. 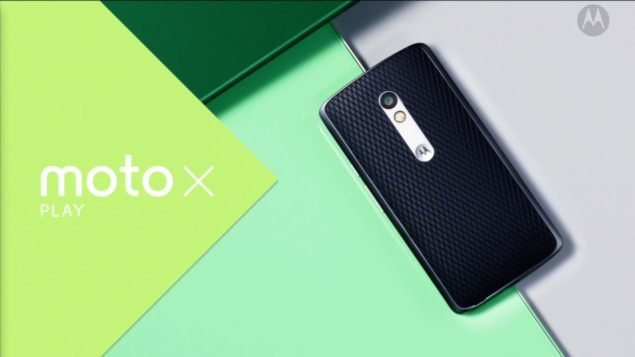 According to Motorola’s official blog post, Moto X Play will be powered by a Snapdragon 615 and will be complemented by 2 GB of RAM. While being a tad bit smaller than Moto X Style thanks to its 5.5 inch screen (and 1080p display), the smartphone does not disappoint at all in the battery department. In fact, the handset possesses a much bigger battery compared to its larger screen sized brother, a 3,630 mAh cell. According to Motorola, the smartphone will effortlessly be able to provide the user with 48 hours of battery life on mixed usage.

Just like Moto X Style, Moto X Play will be featuring a 21 MP rear camera sensor along with a 5 MP front snapper. To boost battery charging speeds, the smartphone with also be featuring the ‘TurboPower’ quick-charging technology that will bring the battery percentage of Moto X Play up in no time.

Moto X Play might be coming in the 16 and 32 GB internal storage models, but it will also possess a MicroSD card slot with a maximum expansion capacity of 128 GB. The device will be running Android Lollipop 5.1.1 out of the box, and will be updated to the highly anticipated Android M platform.

Recommended: Here Is A List Of Devices That Will Most Likely Be Updated To Android M

Moto X Play can be purchased at a price tag of £299 ($467) from the UK, but it will not be available to purchase in the United States till August. Do you guys that this is the perfect price/performance handset to be released by Motorola? Let us know your thoughts.