I wonder how many of our readers have seen the XLIX Super Bowl Half Time show. Needless to say, the number ir probably quite alot. But in my opinion the most impressive thing about the light show was actually hidden from sight. The Monitor-Floor that had a resolution of 3780x3024 and was actually powered by a staggering amount of graphic cores: 8 of them. That is a total of four Dual GPU cards in SLI right there people. 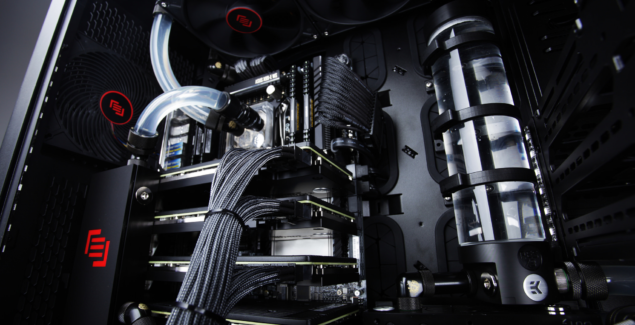 An image of the rig itself @Octane Forums

The custom made rig was outputting an interactive and ray-traced feed from the Octane Renderer onto the giant monitor. If you have ever wondered what it would take to run ray traced imagery at 4K at reasonable graphics the answer is 8 times the power of a single GPU currently has.  The rendering itself was pretty impressive and for those who missed the show I have also attached a video of the lightshow itself at the bottom. For the tech enthusiasts here is a complete list of specifications of the render engine:

You might notice that even though very high end parts are used, some specifications are lacking for a rig of this caliber, the ram might raise eyebrows along with the clock speed of the processor. However, the entire magic was done by on the graphic cards themselves, utilizing the CUDA powered Octane Renderer. CUDA's extensively developed ecosystem is one of the major reasons, why AMD has so far failed to penetrate the video industry.

Being an enthusiast myself, innovative uses such as this are always a cause of interest. More importantly however, we appear to have an actual number on what it would take to get a fully ray traced game. At 4K resolution the number required is 8 monstrous dies however there is still a caveat. The renderings done on stage were quite complex but from a games point of view they were surprisingly simple. As the visual acuity of the scene rendered increases it would take the same rig to just be able to keep up at 1080p Screen Resolution.