I have something very interesting today. The following pictures of the MXM GTX 870M and a GPUZ shot were sent to me by my source. You can see the core codename in the first picture, which, interestingly the does not match anything we know before. Also it is not present in the Techpowerup database. However the chip is undoubtedly an 870M. So what exactly are we looking at?

Let me state for the record that I am not calling it yet. I will give the reasons later but for the moment I am leaving the decision whether or not we are looking at Maxwell up to the readers. Now let me provide you with what we already know. As you may recall, CLEVO slides were leaked two months back that showed the entire lineup as 'Maxwell' along with the codenames of the die. However just soon after another leak confirmed the GTX 880M as nothing more than a re branded Kepler GTX 780M. During this time details of the GTX 870M came to light. One of the important things was that the GTX 870M was going to have 3GB vRAM and not 6GB as the slides had originally said, something which the Techpowerup database confirmed. Also the codename mentioned for the GTX 870M was "N15P-GT-A2". Remember this. Now observe the picture above and GPUZ screenshot below. 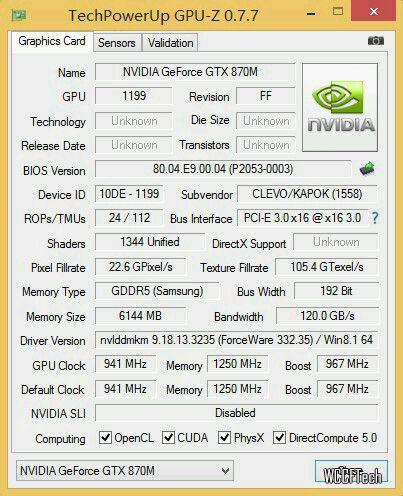 Now as you can probably see, there are two glaring contradictions to the previously confirmed specs. One, the codename is not N15P-GT-A2, its N15E-GT-A2. Secondly the vRAM is not 3GB, its 6GB just as the original leak had predicted. There is also one more major hint, the 870M is present and defined in the Techpowerup database, but we can clearly see that the latest version is not properly recognizing the chip at all. It should be able to tell not only the process but the die size, transistor and direct x support as well. You would also be interested to know that the N15E codename was reserved only for the 880M flagship GPU in the original CLEVO slides.