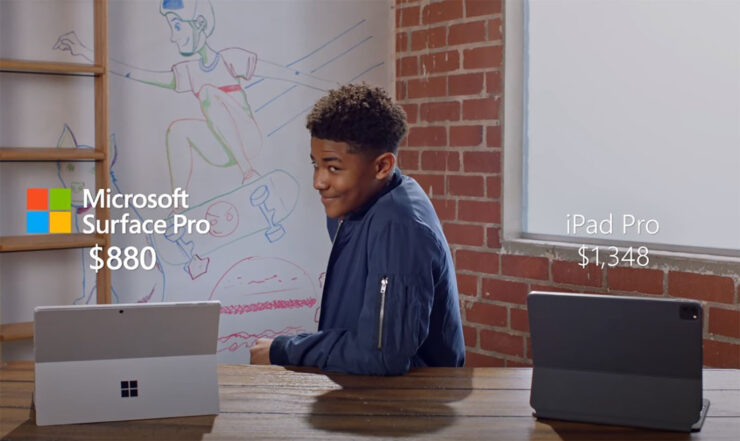 Microsoft’s ad campaign in claiming superiority over Apple’s products is probably not going to take a backseat anytime soon. In the latest video posted on YouTube, the Surface Pro 7 is marketed as a complete and superior package over the iPad Pro.

For some reason, Microsoft wants the audience to believe that the Surface Pro 7 is better in design when compared to the iPad Pro. On its own, the Surface Pro 7 is heavier and sports thick bezels than the iPad Pro, with the only plus-point being the Windows 10 tablet touting an in-built kickstand. The ad also describes the Surface Pro 7 as being versatile in connectivity thanks to its single USB-A and USB-C port, coupled with the Type Cover port and microSD card reader.

The iPad Pro, in comparison, has a single USB-C port, but with the help of a dongle, you can circumvent those wired connectivity headaches. The iPad Pro can also be configured with a cellular modem, giving it an extra layer of wireless connectivity, a feature not present in the Surface Pro 7. As for performance, well it is fairly obvious that the iPad Pro wins by a mile thanks to its A12Z Bionic chipset. Even the most expensive Surface Pro 7 sporting a Core i7 is unable to best Apple’s superior silicon prowess.

As for pricing, the Surface Pro 7 costs $880, while the iPad Pro will set you back by $1,348. The prices of both products are with their respective keyboard attachments. Over here, we can say that victory belongs to Microsoft, but it is a hollow one. We say this because the pricing in Microsoft’s ad campaign is for the Core i3 variant, and it is paired with an unacceptably low 4GB RAM and 128GB of SSD storage.

Want to compare the top-tier models of the Surface Pro 7 and iPad Pro and then come to a verdict? Check out the price differences below.

After analyzing Microsoft’s latest campaign against the iPad Pro, do you still think the Surface Pro 7 is a better product? Share your thoughts down in the comments and do not forget to check out the 30-second ad below.