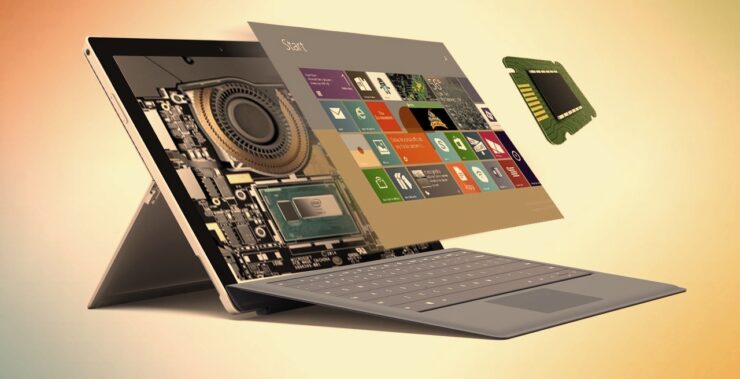 Well, well, well. Things have suddenly jumped up for the Microsoft Surface Pro 5. It's all been about the Samsung Galaxy S8 lately, with the Korean tech giant rumored to make up for the Note 7's failure, guns blazing. Moving back to the Western hemisphere, the only flagship mobile device in the rumor mill so far is the iPhone 8. Apple will also introduce a lot of features for the device, with wireless charging and an all new design expected to take the hat. Now, Microsoft's Surface Pro 5 has also surfaced in a couple of leaks. Take a look below for more.

Just yesterday a mention of the Surface Pro 5 surfaced at a job description for a Microsoft engineer. He's provided services to the company since June 2016, so looks like the project has been under works for quite a while, as it should be. Now, an image of the Surface Pro 5 is available at Microsoft's official news site. However, before you get too excited, we really don't think that anything new can be learned from this apparent leak.

In fact, this image is a straight out copy of what's already available at the Microsoft Store, under product images for the Surface Pro 4. The only difference is that the stylus over here is placed in front of the tablet, rather than its side. To be honest, we believe that its title is a mistake rather than a deliberate listing. Of course, it could also be a subtle way to drum up hype, as there are virtually no rumored Microsoft gadgets in the rumor mill at the moment.

The side of the alleged Surface Pro 5 is exactly the same as the Surface Pro 4. Its stand also extends at exactly the same angle. So that's a big bummer really if you ask us. Either Microsoft has got virtually no design upgrades planned for the 5, or the image's title is an error. Which one is more likely, be our guest to guess. As rare as these leaks of the Surface Pro 5 sound, some details for the device have surfaced (excuse the pun) previously as well.

The device is rumored with an early 2017 launch, a UHD display, USB Type-C support and a magnetic charging stylus. Redmond will also focus on resource sharing for the tablet, according some patents. For Microsoft, it's all about a unified platform for smartphones, notebooks, PCs and IT ever since the launch of Windows 10. This year's refresh for the Surface lineup will also follow these footsteps. Thoughts? Let us know what you think in the comments section below and stay tuned for the latest. We'll keep you updated.