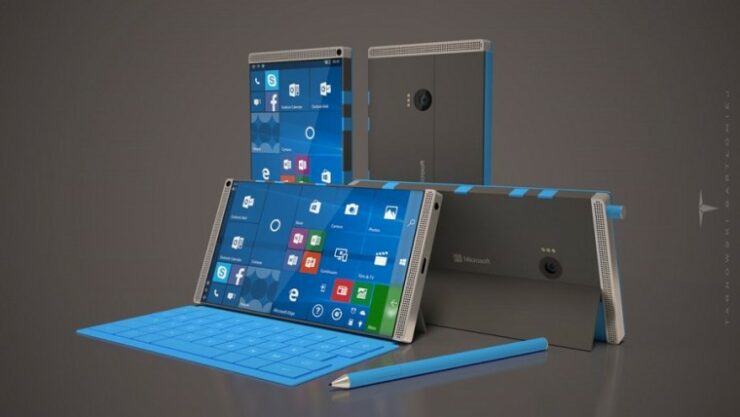 With all the focus in the rumor mill being on Apple's iPhone 8 and a couple of other Android flagships, we've almost forgotten the Microsoft Surface Phone. It's been a long, long time since we've seen the rumor mill mention this device. Earlier in the year, rumors claimed that Microsoft does indeed have a Surface Phone under the works. The smartphone was rumored with the Snapdragon 835, becoming one of the first alleged gadgets to confirm Qualcomm's flagship processor. But now, talk around the Surface Phone has nearly died out. Today, we've got a patent for you which sheds light at Microsoft's thinking for the device. Take a look below to find out more.

Today we've got a patent which shows Microsoft's ideas for a folding Surface Phone. Folding devices have become extinct at the flagship level ever since the smartphone became popular. Microsoft's device isn't the traditional 'flip' folding gadget though. It's got a cover for the main screen, making it more of a phablet. It'll feature two 'bodies', with one being the primary and the other secondary.

It's an interesting design, that's quite different from what we get to see in the smartphone world. Speaking particularly on flagships, 2017 has yielded a rather predictable trend for devices. For a mobile gadget to be classified as a flagship, it'll need an edge to edge display, a 10nm processor, a rear camera with impressive resolution and adequate internal storage with battery life. Depart from this trend and go down in dust, just like LG and the G5.

Sounds like a really cool concept. Too bad we won't get to see it materialize. As far as gadgets go, Microsoft's interested only in computing and tablets. That's not to say that we won't love a Surface Phone. The flagship smartphone race has gotten a bit dull if you ask us and can do well with a brand new approach that the Surface lineup can offer. Thoughts? Let us know what you think in the comments section below and stay tuned. We'll keep you updated on the latest.