The internet has been quite abuzz lately about smartwatches. Pioneered by Google's Android Wear, this year's Google I/O saw several smartwatch launches. LG, Samsung and Motorola all have announced their devices. Called the LG G Watch, Samsung Gear Live and Moto 360, the watches have several unique and new features which provide users more ways to stay up to date and connected with their environment. We have done a detailed comparison of their features and specifications, which can be found here. Well it looks like Microsoft has also decided to enter the smarwatch market, but only indirectly. The company also filed a patent for a smartwatch design back in October 2012, but which were only recently released. The company has reportedly received patents related to several features of smartwatches.

Microsoft already makes millions from Android smartphone related patents. Royalties received from HTC and Samsung totaled $ 800 million in 2012. The company received $ 10 from each phone sold by HTC around $ 12-13 from each phone sold by Samsung. Well it looks like the company has similar plans this time around with the only difference being that the product now in this case is smartwatches. The first patent received by Microsoft is for Discreetly Displaying Contextually Relevant Information on a display device. This translates to the features on smartwatches which allow them to wirelessly receive data from smartphones. In the case of Android Wear watches, this is in the form of notifications, updates, messages and other data that the user might require to be displayed on the go. 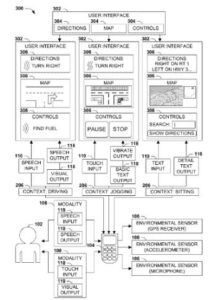 The other patent received by Microsoft is for Dynamic User Interfaces Adapted to Inferred User Contexts. This translates into the smartwatch gathering information about the user's movements and other activities. This can be done through sensors such as accelerometers, GPS and microphones. Through these sensors, the watch can tell whether the user is at rest or is in motion, Different UI displays are to appear on the device depending on the user's activity and the applications installed on the device. Taking the example of Android Wear devices once again, Samsung's Gear Live is to feature several health related apps, one of the features of which will be the ability to monitor the user's heartbeat. However these patents developments should in no way be interpreted as the company not having any plans to develop a smartwatch of its own. There has been quite a lot of news related to Microsoft and smartwatches, and the patent link shared above further lends credibility to the argument.