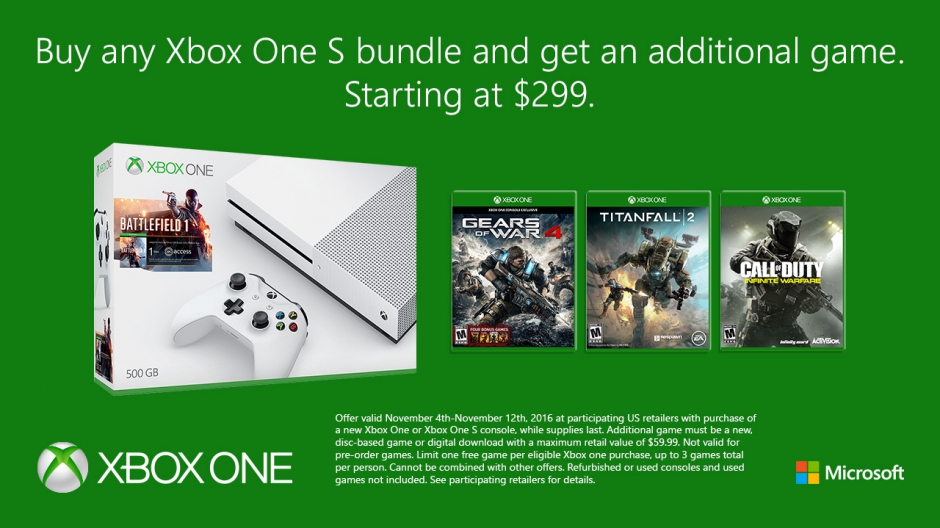 Microsoft is currently offering an additional free game when purchasing an Xbox One/Xbox One S starting at $ 299. Bundles are included as well.

Ahead of this year’s Black Friday deals, those looking for an Xbox One or Xbox One S bundle can already save some hard dollars right now.

The offer lasts from November 4 until November 12  when you purchase a new Xbox One/Xbox One S console bundle. Bundles start at $299 and the additional game must be new with a maximum value of $59.99 (digital or physical). The deal is limited to 1 free game per Xbox One S bundle, and up to 3 free games total per person.

From November 4 – 12, when you buy any new Xbox One or Xbox One S console bundle, you also get a new game of your choice, starting at $299.

This means you can experience the dawn of all-out war with the Xbox One S Battlefield 1 Bundle (500GB) and add on Call of Duty: Infinite Warfare, all for $299.

Love Gears of War? Get the Xbox One S Gears of War 4 Bundle (1TB) and add on Battlefield 1 or Titanfall 2 at no additional cost.

There’s no shortage of reasons to buy the newly designed Xbox One S, the only console featuring 4K Ultra HD Blu-ray, 4K video streaming, and High Dynamic Range. Play over 100 console exclusives and a growing library of Xbox 360 games. Stream your favorite movies and shows on Netflix and Amazon Video in stunning 4K Ultra HD. Play games like Gears of War 4, Battlefield 1, and Madden NFL 17 with friends on Xbox Live, the fastest, most reliable gaming network. Suspend and resume your game whenever you want — or just pick up where you left off on another Xbox One or Windows 10 PC with Xbox Play Anywhere titles. And experience richer, more luminous colors in games and video with High Dynamic Range.

With the amazing games launching this Holiday, there’s never been a better time to game on Xbox One.

The offer cannot be combined with other offers and is available at participating retailers, including Amazon, Target, GameStop, Best Buy, Walmart.com, and Microsoft Store.