OnePlus 2 and Doogee F3 might be considered as the world’s cheapest Snapdragon 810 smartphones to ever be announced, but Micromax Yu5050 will soon take their place as one of the most affordable devices to sport Qualcomm’s flagship SoC.

Micromax Yu5050 Costs Just $315, But There Is One Slight Problem To Owning The Device And It Is Not Related To Overheating

The source has stated that on India's Zauba import-export site, there is information concerning Micromax Yu5050. Without going in to too many useless details, let us get right down to the hardware specifications bit and tell you that the smartphone features a 5.2 inch screen that renders a resolution of 1080p. This approach taken from smartphone companies of incorporating a 1080p resolution instead of a 1440p one is a very wise one, considering the fact that a 5.2 inch screen is not sufficiently large to accommodate a big battery.

However, one of the most disappointing aspects of Micromax Yu5050 was that while it does sport a Snapdragon 810, the company has forced to downclock the speed of the octa-core processor in order to keep the thermals under check. That being said, the octa-core processor is going to be running at a speed    of 1.5GHz (this includes both Cortex-A57 and Cortex-A53 cores), which will definitely keep the CPU cool. However, instead of downclocking the processor, would it not been a much better idea to incorporate a better thermal solution like Sony did with its Xperia Z5 Premium?

Perhaps the company avoided this since it could have raised the price to the extent that Micromax Yu5050 would no longer possess the title of being the most affordable Snapdragon 810 smartphone out there. There are other things to look forward to, such as 4GB of RAM, and an LTE modem. What is even greater about this handset is that it is running Cyanogen 12.1 pre-installed meaning that you will not have to witness all the unnecessary crapware installed on your smartphone. 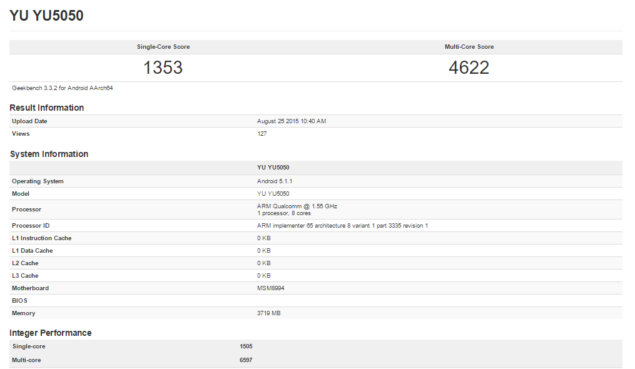 Since the chipset present inside Micromax Yu5050 belongs to Qualcomm, it will support the company’s Quick Charge 2.0 functionality, just as long as a compatible charger has been bundled with the device. The smartphone will be available to purchase during the later months of 2015, but as far as hardware specifications go, this is the most affordable Snapdragon 810 handset that you will ever come across.