Biologists have been working long and hard in order to culture multiple cell types together so that a possible cure for cancer and other similar deadly diseases can be found. But since replicating cells of a body together with a bunch of cancerous cells is not an easy task to carry out, biologists usually try carrying out cultural experiments on a single cell type in a petri dish, hence making it less appropriate because there is no absolute dynamic cell interaction that can be seen while studying living organisms cell types.

As a result of the above mentioned shortcomings, MIT spinout AIM Biotech finally came up with a solution in the shape of a new device that they call ‘Microfluidics’. This was created after an extensive research of decades and by using this device biologists can now co-culture more than type of cell, that too in a 3D hydrogel environment. This hydrogel literally resembles a human body’s natural tissue to the nearest form possible. Adding to that microfluidics can also help biologists find out how cancerous cells react when chemotherapy agents are applied to them, making it easier for them to analyze what would be their next step.

“If you want realistic models of these processes, you have to go to a 3-D matrix, with multiple cell types … to see cell-to-cell contact and let cells signal to each other,” Kamm says. “None of those processes can be reproduced realistically in the current cell-culture methods.” 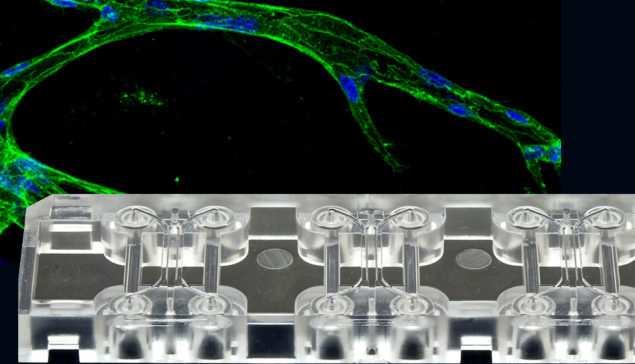 The new device was originally developed for Kamm’s lab; the contents are basically a plastic chip which contains three chambers out of which a middle chamber is for hydrogel and for any other type of cell e.g. cancerous or endothelial cells. The hydrogel chamber is different from usual chambers since it contains an opening on each side which makes it easier for the cells to interact with it. This whole design makes It quite similar to natural interaction of cells in the human body.

Another way to culture 3D cells is to fill deep dishes with hydrogels. According to Kamm, its extremely difficult to capture high resolution images. But Kamm explained how AIM Biotech devices are easy to settle under the microscope which makes it more beneficial for imaging.

“Everything here happens within about 200 microns of the cover slip, so you can get really good high-resolution, real-time images and movies,” Kamm says.

This device will help give biologists a better understanding of how cancerous cells work and may help find a cure for cancer, let's hope it does soon.

Sony Making Games That “Can Only be Enjoyed on PS5,” Xbox Crossgen Approach Not for Them

Ghost of Tsushima Has Only One Ending, Decapitation and Body Part Targeting Not Possible