With ridiculous amounts of storage being crammed in to items as minute as MicroSD cards, Microdia has announced a 512 GB storage card, called Xtra Elite and in the process, has overtaken SanDisk in the ‘largest MicroSD storage’ race. Previously, SanDisk had announced a card that featured 200 GB of storage. Now, Microdia has unveiled its own that possesses more than twice the amount of storage compared to SanDisk’s offering. Only recently, HTC announced its One ME, a smartphone that supports MicroSD cards up to a capacity of 2 TB. For some flagship handsets, the aforementioned capacity will not be recognized, so future consumers who have extra money to shell out will be purchasing smartphones that can effortlessly recognize the extra storage capacity and use it to their advantage. 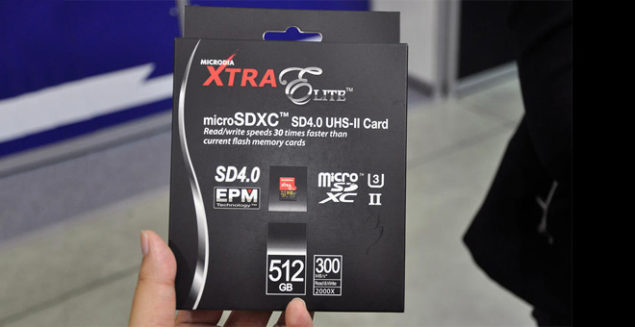 Microdia announced its high-storage offering during the Computex 2015 event. Even though the MicroSD card’s capacity is far lower than the maximum storage support from some smartphones, it should not be long when we will begin to witness cards whose capacities exceeding the 512 GB mark. Though the following was expected, Microdia will not go easy on consumers who are willing to spend money to acquire the 512 GB of Xtra Elite.

This particular MicroSD card will carry a price tag of $1,000 and is expected to go on sale in July. According to CNET, the price tag has not been finalized, so it is possible that you could end up paying far more than you initially intended to. For such a storage card, you can rest assured that read and write speeds will be top notch. According to the source, Xtra Elite will utilize version 4.0 of the Secure Digital standard, and feature an Ultra High Speed (UHS) bus that will feature transfer rates up to 300 MBps.

Since it will use the SD 4.0 interface, the card will feature an additional row of pins below the standard ones. The only drawback to owning a high capacity storage card is that incase Xtra Elite ends up getting corrupted, you could lose a lot of crucial data. Huga Barra, Xiaomi’s VP had earlier stated that the company does not incorporate MicroSD card slots in high-end smartphones because it comprises the device’s overall quality.

While the company could be doing this in order to avoid unnecessary costs, we are certain that if you’re willing to spend a ton of money on just a MicroSD card, then Microdia would make sure that its Xtra Elite would not succumb to corruption that easily.