The hype these days has been centered around Chinese smartphone manufacturer Xiaomi. The company is widely expected to launch its next flagship, the Xiaomi Mi5 tomorrow. Specifications on the Xiaomi Mi5 have been mixed so far. While some sources have been claiming that the Mi5 will be coming with Qualcomm's latest, Snapdragon 810 on board, others, more recent ones suggest that Xiaomi might be aiming for the Snapdragon 805 or even the 801 for the Mi5, making it an incremental upgrade over its previous device. Well, you can add more speculation to that, as we've received a poster today that shows Xiaomi's plans to launch two devices tomorrow, one of which will be featuring a Snapdragon 810. 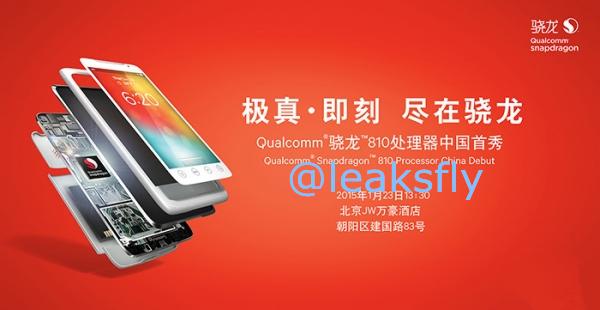 Xiaomi Mi5 coming With Snapdragon 810 After All? Leaked Poster Suggests So

If we're to believe an alleged Xiaomi poster leaked by Leakfly on twitter, then the next Xiaomi flagship might as well be coming with the snapdragon 801 on board. Xiaomi's latest teaser image also shows two devices, so a Xiaomi flagship tomorrow is almost confirmed at this stage. The poster also puts a date for a Qualcomm Snapdragon 810 debut even in China on January 23rd.

Xiaomi choosing to equip its latest flagship with the Snapdragon 810 would be great news indeed and would undoubtedly further solidify the smartphone manufacturer's standing in the mobile industry. Add that to a reasonable price tag and good camera/display quality and Xiaomi could very well be looking at a winner on its hands. So far the Xiaomi Mi5 is rumored to come with a Snapdragon 805/810 on board, with 3 GB of RAM and a 13 MP rear camera. By the looks of things, the device is also going to get a 5.1 mm thin metal frame, that will effectively place it among the thinnest devices out there. So all on eyes on Xiaomi tomorrow, when we'll finally be able to know what the company has in store for us. Meanwhile, let us know what yu think in the comments section.