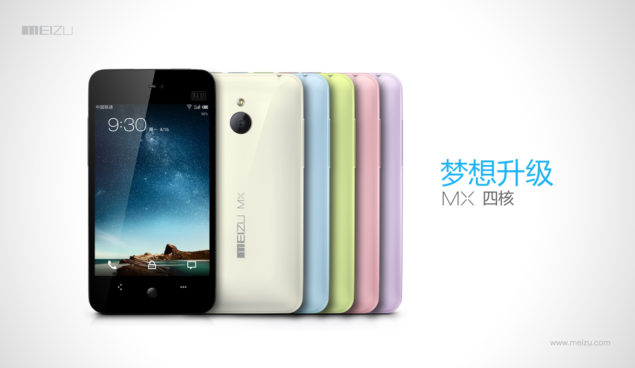 Meizu has just announced their latest Android smartphone, dubbed MX quad-core. It will come preinstalled with Android 4.0 and Meizu's own custom skin, called Flyme OS. As the name suggests, it will be powered by a quad core CPU from Samsung. More specifically its an Exynos chipset built on a 32nm manufacturing process featuring four Cortex-A9-based cores. No information regarding clock speed has been given.

To power this chipset, the battery has been beefed up to 1700mAh. How well that translates into real world usage, we'll have to wait to test it ourselves. On the back is a 8MP back-illiminated camera that shoots video in 1080p. Low light performance has been enhanced thanks to a large aperture of F/2.2. There are five colors to chose from for the battery cover.

The display is a 4.0'' 640x960 using ASV technology. This translates into a PPI of nearly 290. AVS technology results in better viewing angles and more natural colors.