Despite having been all the rage at one point in time, physical keyboards are officially dead, thanks to the countless touch-screen devices available in the market presently. But one company, BlackBerry, believes that physical keyboards are still the way to go in a lot of cases, hence they released the BlackBerry Priv handset to further prove that notion. What would it be like, if for say, Apple, made an iPhone with a slide out physical keyboard? Though we know for a fact that Apple would not take that route, but a group of designers came up with the iPhone 6k concept, that imagines an iPhone 6s with a slide out hardware keyboard, much like the aforementioned BlackBerry Priv. 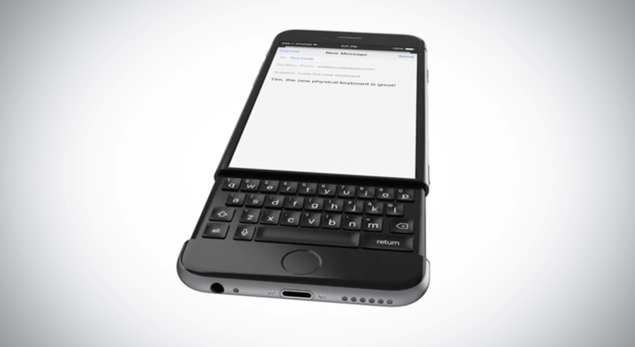 An iPhone 6s With A Physical Keyboard? Might Tickle The Fancy Of Some.

On the design front, the iPhone 6k is just a reimagined iPhone 6s with a BlackBerry style slide out keyboard. But the real magic about the keyboard is that it lives inside the phone's body, and there's no way to tell whether or not the keyboard is there until or unless you slide it out at your will.

Rather than just conceptualizing just another physical keyboard, the keys on the iPhone 6k are backlit, so you can rest assured that you can keep on typing even when the lights are out. Furthermore, the iPhone 6k is available in multiple color options to suit your taste.

Check out the video below and see for yourself what the iPhone 6k concept is all about:

As you can see from the above video, the concept is no doubt a fine work of art, and just for the sake of comparison, the designers threw in the BlackBerry Priv into the mix as well.

Like we mentioned at the start of this post, physical keyboards are long gone and mobile devices these days, especially smartphones, rely a lot on software on-screen keyboards. While the idea was a brilliant one at some point in time, due to the fact that technology hadn't jumped miles ahead like it has right now, but there's a time when all good tech must come to an end. Luckily though, some people out in the tech space still believe that the tactile feel of a physical keyboard can't ever be replaced by a software one no matter how hard one tries. BlackBerry for sure lives on top of that thought, and decided to go ahead with its plans and released its first ever Android powered handset with a physical keyboard, the BlackBerry Priv.

What do you think about the above concept? Let us know in the comments section below.