MediaTek's been making quite a few appearance in the news over the past couple of days. After the company unveiled its Core Pilot 2.0 yesterday, which incorporates HSA principles into GPU functionality as well, today more news has surfaced about its deca core Helio X20, a chipset quite unique in its design that hopes to change things architecture wise. 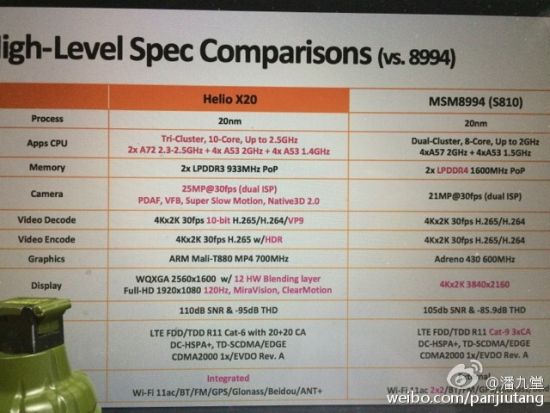 After we heard about MediaTek's unique 10 core MT6797 last month, more word on the company's unique processor has surfaced today, courtesy of the same source. The MT6797 came with a tri-cluster design, which shoved a 'Medium' core cluster in the middle of already existing big.LITTLE architectures. Coming with two quad Cortex A53 and one dual Cortex A72 cluster, the MT6797 was shown achieving a score of 70,000 on Antutu on MediaTek's leaked slides. We get to know more details about MediaTek's upcoming offering courtesy of today's leaked slides.

The MT6797, or the Helio X20 can support cameras with resolutions up to 25 MP and includes support for 4K video encoding and decoding. It also includes support for LPDDR3 memory, at a time when most industry giants seem to be shifting towards DDR4. The SoC's been directly compared to Qualcomm's Snapdragon 810 above, in a move that makes it appears that MediaTek's out for some blood, following the US manufacturer's fall from chipset grace. The MT6797 will also support displays with resolutions up to 2560 x 1600, while the Snapdragon 810, as is also evident in MediaTek's own slides is capable of going as high as 4K. Wireless support on the MT6797 extends up to Cat. 6 LTE.

While the MT6797 sounds quite impressive on paper, the processor's real capabilities will only become known once it hits the market. After all, MediaTek should also be focusing more towards areas of heat dissipation and power consumption if it truly wants to challenge Qualcomm's dominance in the market. And while the MT6797 is quite an improvement over its predecessor, it still falls short of the Snapdragon 810 in several areas. Perhaps MediaTek has got some more impressive plans for future processors. Or it simply believes that the 4K train isn't worth riding on. We'll find out soon. Stay tuned and let us know what you think in the comments section.