A few months ago we heard about the now-niche company Matrox collaborating with AMD to release a new lineup of professional GPUs. To the old tech enthusiasts this news had a very subtle ring of irony in it along with the usual news value because of the fact that Matrox at one point in time used to compete with AMD on the same turf its now renting land from. The details seem to have been finalized because Matrox just launched its new lineup of GPUs featuring AMD's Cape Verde core. 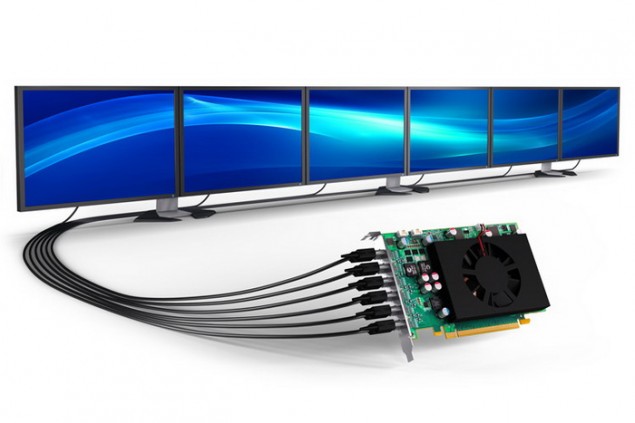 Back in the golden age, Matrox was a high-end 2d graphics company right there with our lovable red-green duo and the legendary 3dfx. Notably, it released the Matrox Millennium GPUs that could be considered the 'Titans' of the 1990s. However with the revolution of the 3d Graphics, Matrox started lagging behind its rival siblings. It decided to quit and focus only on niche markets leaving 3dfx, Nvidia and AMD alone in the ring. It is because of this reason that the original news that Matrox is using the cores of its old rival was quite interesting to some. Matrox has now officially launched the new generation of AMD powered GPUs which to my knowledge consists only of the Matrox C420 LP and C680 (with multiple output variations). The cards will support 4 and 6 display screens respectively and be priced at 450 and 540 euros each (yikes thats alot).

The excess premium comes because of the inclusion of enterprise class software,industrial grade Pro A/V, digital signage and security control among other things. To the codename averse, the Cape Verde core is the same core that was featured in the Radeon 7700 GPU. Both cards will have DX11.2, 2GB GDDR5 Memory, OpenGL 4.4, OpenCL 1.2 and PCIE-E 3.0. Some variants will support passive cooling and will support upto six 4096x2160 @30Hz outputs which is quite  alot.

Matrox also mentions that these will come with a 3 years extended warranty. Needless to say these GPUs offer very little value to the mainstream market and are instead targeted at a very certain niche market (which even AMD does not target). These GPUs are usually designed for television centres and tv studios were live monitoring of different video feeds is required without any real GPU-intensive work. It is also good to see AMD getting out of its comfort zone and lending its cores to third parties, a tactic that has serious potential in the future.