The Samsung Galaxy S8 has been seeing some rather wild rumors. After the failure of the Galaxy Note 7, the Korean tech giant's in a tough spot. It's either make or break for Samsung in the tech world. Things move fast and two consecutive failures or disappointments might spell irrevocable damage for the company. To make up for lost gains, the Galaxy S8 will feature a lot of upgrades. Or at least that's what the rumor mill wants us to believe. Today, we've got more news from an alleged Samsung employee. Take a look below to find out more.

The Galaxy S8 has been so popular on the rumor mill that it's caused Samsung itself to issue a blanket ban on leaks. The company's head of mobile in the East issued strict instructions to employees for non-disclosure on all things Galaxy S8. As is customary, the information itself soon appeared in Korean media. Now, an alleged Samsung employee appears to have confirmed a lot of details that we've heard about the device.

To recap, the Galaxy S8 is rumored to feature two screen sizes. These will be 5 and 6 inches with no home button. Both Samsung and Apple are rumored to introduce virtual home buttons on their devices next year. In addition, you'll also witness an edge to edge screen on the Galaxy S8. On China's Weibo, a discussion related to these specifications took place recently. 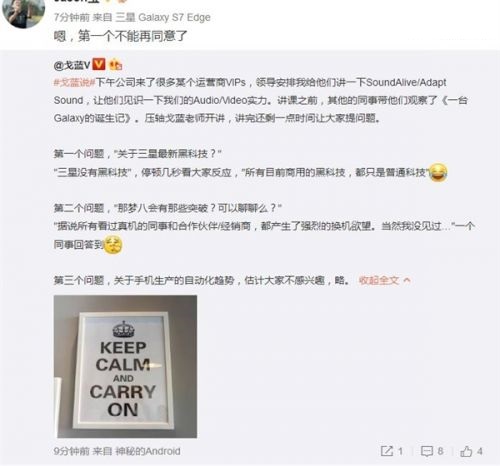 When asked whether these features will make it on the Galaxy S8 next year, a Samsung employee replied that all of it is true. In fact, the Korean tech giant's suppliers and distributors have been clamoring for change for quite a while too. The Galaxy S8 has seen its fair share of impressive rumors. Just yesterday, we saw news surface that the device will boast 8GB of RAM. Samsung's got big plans for the device, and one of these appears to be running performance intensive programs on the device.

Whether the leaks stand the test of time, we'll find out soon. The rumor mill's got a consistent rate of accuracy, as we've witnessed in the past. By the gist of it, the Galaxy S8 will put a lot of devices to shame. Once again, we're just hoping that Samsung carries out thorough testing on it. Wouldn't want another Note 7 fiasco next year after all. Thoughts? Let us know what you think in the comments section below and stay tuned for the latest.