Over the past couple of hours AMD has revealed some major restructuring with the most significant change being Lisa Su stepping up as the CEO of the company. Some pubs including Fudzilla and VentureBeat got transcripts of in-house interviews, revealing the future stratagem of the company. 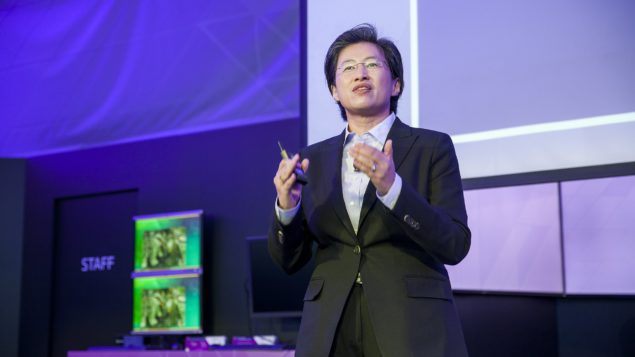 To start off, Lisa said that AMD will be focusing on creating great products and utilizing AMD IPs. She talked a bit about the K11 and K12 chips and the 20nm Radeon GPUs that will be coming 'in the next few quarters'. She also mentioned that AMD will be increasing focus on Custom Chips and Embedded Solutions; and that since there are thought to be around 50 Billion connected devices by 2020, she would like to see an AMD chip in the majority. Lisa Su had a very admirable response to a question asked about tough competition from Intel:

Lisa Su: My view of AMD is that we have a tremendous set of technology assets, people, capability, customer relationships. We’re not going to define ourselves in somebody else’s shadow. We have great technology assets that we can apply across a number of different markets. In the PC business, we obviously compete against Intel, but in other businesses, as we go into embedded and semi-custom, it’s a different playing field. (Source: VB)

Lisa then said that she wants AMD to be simple fast and 'finish products on time', this is something I found very intriguing since it implies that the company has not been on time before. This was probably a passing remark (and admittance) to the late arrival of the Phenom CPUs and the Dr.-Who-worthy mess, its low-end APU products are in (some Kaveri SKUs still haven't launched in target markets). Hopefully this means that the wide variety of upcoming AMD products including Pirate Islands, Zen, Nolan, Amur and ofcourse Carrizo would arrive atleast with the curve, if not ahead. However, as one of the few female CEOs in the Silicon Valley (and the first one for AMD) she personifies competency. We wish her the very best of luck for her term as CEO of AMD.