Focus Home Interactive and Dontnod Entertainment, the team behind the successful Life is Strange, have shared today the first screenshots for Vampyr, an atmospheric adventure game launching next year on PlayStation 4, Xbox One and PC. 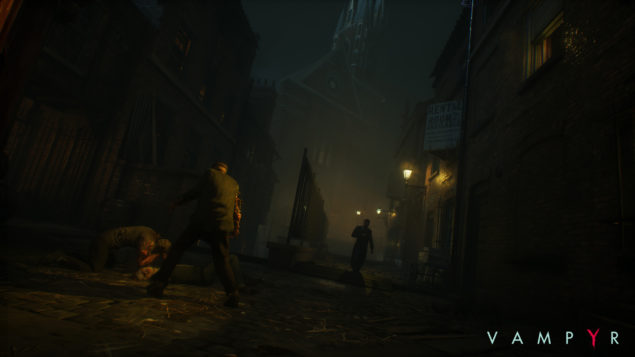 Vampyr is set in Britain during the early 20th century, with the country plagued by the lethal Spanish flu, which has plunged the country itself and the city of London in despair. The few survivors who walk the streets of the city, now ruled only by fear, become victims of vampires. Among them is main character Jonathan E. Reid, a military surgeon who is turned into a vampire following his return from the front.

Vampyr is going to feature a rather atmospheric setting, plenty of characters to interact with and a very serious dilemma which will challenge players. Characters who become Jonathan's prey will be gone forever, and their deaths will impact the game's world.

Explore the darkly atmospheric streets of early 20th century London, and interact with a multitude of characters with their own identities and importance. Accept and fulfill the missions they give you, but don’t forget: sooner or later, you will have to feed, and make a difficult choice... who will be your prey? Absolutely all characters in the game are potential victims of your vampiric lust. Carefully study the habits of your next victim, his or her relationships with other characters, and set up your strategy to feed, unnoticed: seduce them, change their daily habits, or make sure they end up alone in a dark street…

Vampyr also offers a deep crafting system. Find and loot materials and components from the fresh corpses of your victims or during exploration, in order to craft and improve tools, melee and ranged weapons, as well as special ammunitions and coating to exploit the weaknesses of your enemies.

Vampyr is currently in development for PC, PlayStation 4 and Xbox One and it will launch in all regions sometime during 2017.

Vampyr Sold More Than a Million Copies; Focus Home and DONTNOD Are Renewing Their Partnership