Leaked Intel roadmap discloses upcoming Core i3, i5 and i7 processors

A leaked roadmap has revealed some details about the timeframe in which Intel will launch its new Core i3, i5 and i7 processors. Included in the upcoming launches are two low-powered "S" versions of the Core i5 750 and i7 860 Lynnfield chips, clocked at 2.4GHz and 2.53GHz (and scale up to 3.2GHz/3.46GHz). These new S chips are slated to consume only 82W of power versus 95W, while featuring 8MB of L2 cache and should appear in the first quarter of 2010. 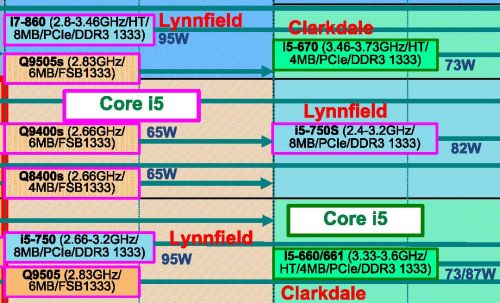 The leak doesn't end there, it also gave a peek into the Clarkdale product line up. If it's legit, according to the leak, Intel is all set to roll out a new Clarkdale-based Pentium G6950 clocked at 2.8GHz with 3MB of L2 cache. The Core i3 530 and 540 will be introduced with frequencies of 3.06GHz and 2.93GHz, and 4MB of L2 cache. 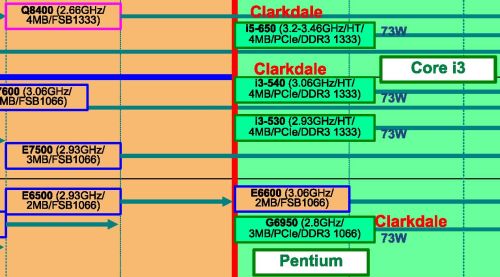