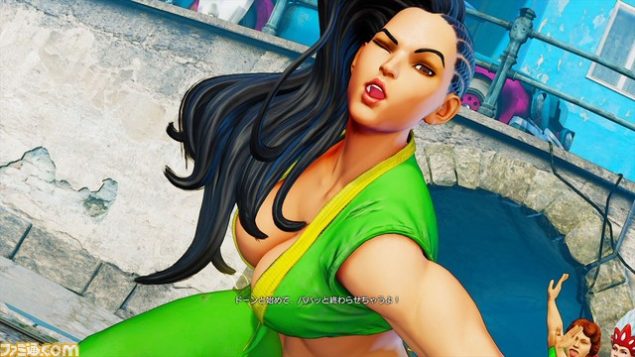 Translation: "It starts with a beat and ends with a bang!"

Laura seems to have been leaked early, as the Famitsu site has now protected the 'leak'. Luckily Neogaf user Neoxon, downloaded the leaked images from Street Fighter V's newcomer.

Judging from the style of fighting and clothing, Laura is Brazilian and practices the art of Capoeira. Reminds me a bit of Eddie from the Tekken series.

Check out the screenshots for Laura down below:

Returning characters and newcomers for SFV

Hailing from the Middle East, Rashid is a fun, easy going individual who has an affinity for technology. Although his fighting style is casual, it’s anything but laid back! Using the power of wind, Rashid is definitely one of the more difficult characters to catch.

Street Fighter V was announced by Capcom back in December of last year, after a trailer for the game leaked. The leaked trailer was pulled by Capcom almost instantly. The game will launch in 2016 for PC and PS4.