Rising Chinese smartphone maker Huawei is expected to unveil its flagship offering, the Ascend P8 on April 15, 2015 but before that release, you can be assured that there are going to be a flurry of leaks concerning the hardware specifications and the features that will be stuffed in the highly anticipated smartphone. Starting off, a source has stated that the upcoming design of the device is going to sport a very thin form factor. 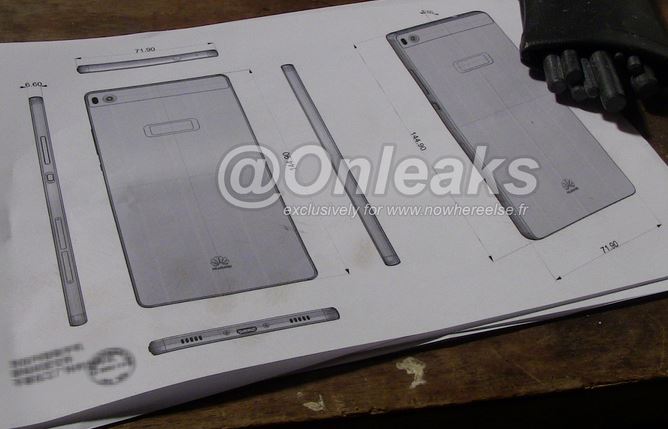 Thanks to the blueprint leak, the exact dimensions of the device have now become available and are as follows:

While the total length of the Ascend P8 is going to be 5.7 inches, the screen size is expected to be 5.2 inches. With a larger frame and slim design, the upcoming device is larger than the company’s Ascend P7, which measures in at:

In addition, the Ascend P8 is also expected to feature a fingerprint scanner, which is going to possess similarities to Apple’s patented Touch ID interface. As for the hardware specifications of the upcoming handset, Huawei will be looking to incorporate its Kirin 930, which is exact same chipset that the company has placed inside its flagship slate, the MediaPad X2.

The Kirin 930 will feature an octa-core package that will comprise up of two quad-core processors:

Utilizing ARM’s big.LITTLE architecture, the Ascend P8 will pair up one powerful quad-core processor along with a lesser performing quad-core CPU in order to deliver the perfect balance between raw performance and energy efficiency. In addition to the Kirin 930, the smartphone is also expected to possess 3 GB of RAM, a 13 and 8 megapixel combo and a beefier battery. To deliver additional battery life to the user, it has been rumored that the Ascend P8 will have a battery saving feature that will disable majority of the functionality of the handset but leave the core applications intact.

Huawei also announced its Kirin 940 and 950 SoCs; the chipsets are going to be the first belonging to the Kirin lineup to feature a co-processor called the i7 (not to be confused with Intel’s Core-i7 CPU). Since the aforementioned chips are going to be featured in the first handsets during Q4, 2015, consumers will not be able to witness their capabilities. Instead, they will get the next best thing; the Ascend P8.