With barely a week left until we lay our eyes on the HTC One M9 Plus, at the company's event in China, folks over at HTC should be done with final preparations surrounding the device's launch. Looks like that's the case as some fresh new alleged press renders of the HTC One M9 Plus have surfaced today, which end up showcasing the device in a much clear manner than before.

With only five days left until HTC launches the larger screened variant of its One M9 flagship, launched at the MWC last month. The HTC One M9 came with the Snapdragon 810 on board, which despite its significant performance enhancements offered, ended up plaguing the device with overheating issues. This resulted in HTC having to release updates to fix the problem. Today's post however relates to the HTC One M9 Plus, and one of the first things that'll you'll notice when you look at the image above is that the home button seems to have made it back on HTC's device. 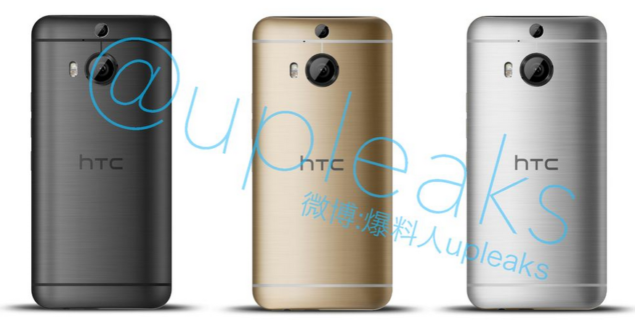 Dual camera also seems to have made it back on HTC's flagship this time around as can be seen in the images above. Apart from these changes, little seems to have changed on the One M9 Plus in terms of design, leaving us to wonder at what could have caused HTC not showcase the device alongside the One M9 last month. As far as specifications for the device go, a MediaTek CPU alongside 3 GB of RAM and 32 GB of internal storage have been rumored for the device so far. Another concerning point related to the One M9 Plus is that if Qualcomm's unable to fix overheating problems on the Snapdragon 810, then what processor will the international variant of the device feature, if any? Stay tuned, we'll be covering the One M9 Plus' launch in China. And take a look at all of the One M9 Plus' renders leaked today.