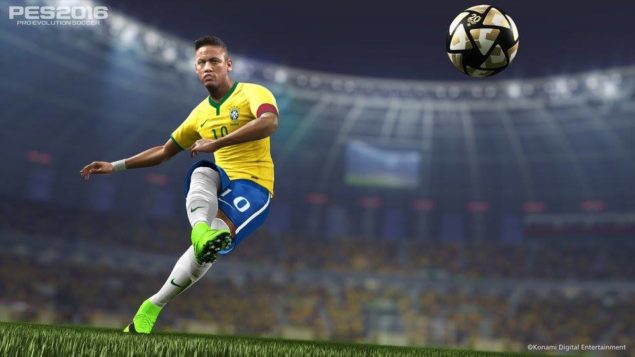 According Konami’s press release, the free update will roll out on October 29th for PC, Xbox One, Xbox 360, PS4 and PS3. The update will be automatically downloaded and added to the main game, with all team rosters updated in line with current registered squads.

Player forms will also be updated, which will be constantly monitored as part of KONAMI’s ongoing weekly update files, which alter according to the real-life form of players. New kits will also be added to the main game, adding further authenticity.

Taken from the press release:

All new French Ligue 1 and Ligue 2 kits have been updated and implemented, as have those of the top two Spanish leagues. Additionally, new Serie A Italian kits have been updated, while Dutch sides FC Groningen and FC Utrecht now appear in their officially licensed strips. They are joined by officially licensed representations of key European sides, such as Galatasaray, Panathinaikos and Maccabi Tel Aviv, while the South American team roster has been bolstered with the official kits for Brazil’s Flamengo and Palmeiras as well as Argentinian trio Independiente, Newell’s Old Boys and Vélez Sarsfield. With PES 2016 exclusively boasting the UEFA Champions League and Asian Champions League modes within its options a number of dedicated kits for these tournaments have also been added

PES 2016 is highly regarded for its realistic representation of players, with its unique Player ID system ensuring that its many stars not only look like their real-life counterparts, but their abilities and playing styles, too. Over 3000 players already utilize bespoke stats, and the new update adds an additional 70+ realistically modeled players. The new additions represent a cross section of the world’s best and upcoming players, with the likes of Luuk de Jong, Yevhen Konopolyanka, Jordon Ibe, Danny Ings, Joshua Kimmich, and Burak Yilmaz amongst those benefitting. Each player will boast animations and likenesses that mimic them in every way, and will work within PES 2016’s Team ID system, wherein teams are set up to match the playing style of their club. Other additions include new boots from the likes of adidas, Mazuna, New Balance, Nike Football and Umbro, as new styles such as the adidas X and Ace are added alongside New Balance’s Furon Pro, Nike’s Mercurial Superfly, and the UX-2 from Umbro. Billboards and stand décor have also been enhanced in line with real world changes. There are also a number of gameplay tweaks added to enhance the user experience following consultation with the vibrant PES 2016 fan base.

PES 2016 released a month ago on September 15th, and is considered the main rival of EA’s FIFA series.