Huawei’s Kirin 960 is officially here, which only means that the company’s Mate 9 will be just around the corner. Kirin 960 packs quite a punch and will feature the most powerful mobile GPU the globe has ever come across.

While Snapdragon 653 was believed to be the first SoC to feature Cortex-A73 cores, it appears that Kirin 960 has won that race and will take advantage of the powerful octa-core processor that will comprise up of 4 Cortex-A73 cores and 4 Cortex-A53 ones. Not only is the processor’s capabilities going to be sufficient, but as stated two times earlier, Kirin 960 will also feature the most powerful GPU present in smartphones, the ARM Mali-G71.

The ARM Mali-G71 was detailed earlier to be up to 1.8 times as powerful as the Mali-T880 MP12 GPU.  used in the Exynos 8890-powered Galaxy S7. The Mali-G71 GPU also uses ARM’s brand new Bifrost architecture, which is claimed to offer high-end 4K and VR experiences. It is also compatible with Vulkan, OpenGL ES 3.2, GPU Compute, and Android RenderScript. ARM Mali-G71 is said to be running at a base clock speed of 850MHz, and the 16nm GPU can provide a throughput of 27.2Gpix/s, which is double than that of the Mali-T880 GPU running at the same frequency. 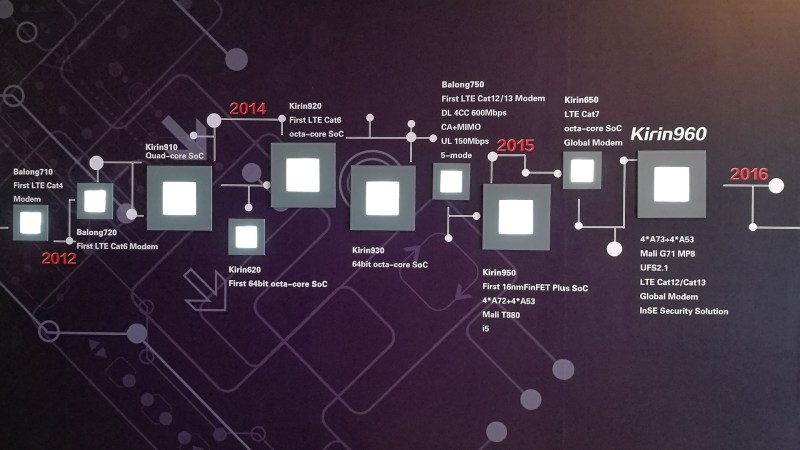 This upgraded experience means that Huawei Mate 9 could only be the fourth Android smartphone to be Daydream compatible, only after Pixel and Pixel XL,and the Axon 7. According to sources close to the matter, Kirin 960 is expected to be manufactured on the TSMC’s 16nm FinFET node. In contrast, Kirin 960 is able to deliver better processing performance by up to 15 percent, graphical improvements up to a whopping 180 percent, and the improved GPU architecture means that it will deliver up to 20 percent better GPU efficiency.

In addition, the SoC will provide support for the UFS 2.1 storage standard and LPDDR4 memory. We honestly cannot wait to see what sort of performance Huawei Mate 9 packs underneath its hood. However, to get a rough idea of what the Kirin 960 is capable of, we have posted screenshots of when Huawei made the official announcement and ran the public through the advantages of the chipset. Do you think the additional firepower will make Mate 9 a better choice than Galaxy Note 7? Tell us your thoughts right away.