A few hours ago, some unknown backer pledged to one of the many game projects currently on Kickstarter and moved the total of pledges for this particular category over $500 million.

If you check the official stats, the game category is the first one in terms of pledged amounts; it has a 33.12% success rate, which is slightly lower than the average for Kickstarter projects (35.96%).

Kickstarter itself also provided some additional data through an infographic. 8K game projects were successfully funded so far via the crowdfunding platform, with over 2.2 million backers participating. Of course, you have to consider that the game category isn't only referring to videogames; in fact, the bigger slice of these $500 million went to tabletop game projects which received $265 million, while videogame projects "only" got about $186 million. Just recently, the Dark Souls board game became the second most funded project (the first one is card game Exploding Kittens) in this category with £3,771,474 in pledges. 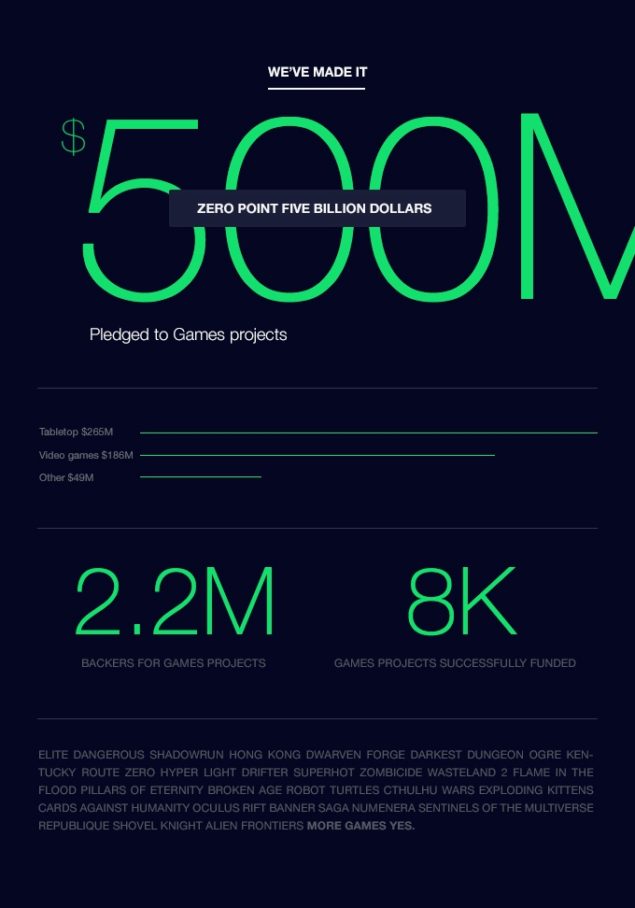 Of course, we all know that the biggest crowdfunded videogame is Star Citizen and Chris Roberts' exceedingly ambitious space simulation only got $2.1 million of its $115+ million crowdfunding total via Kickstarter.

The crown of the videogame category on this platform belongs to Yu Suzuki's Shenmue III, though, with $6.3 million. Igarashi's Bloodstained: Ritual of the Night retains the second place with $5.5 million; the third place still belongs to Torment: Tides of Numenera, the cRPG by inXile Entertainment already available via Steam Early Access.