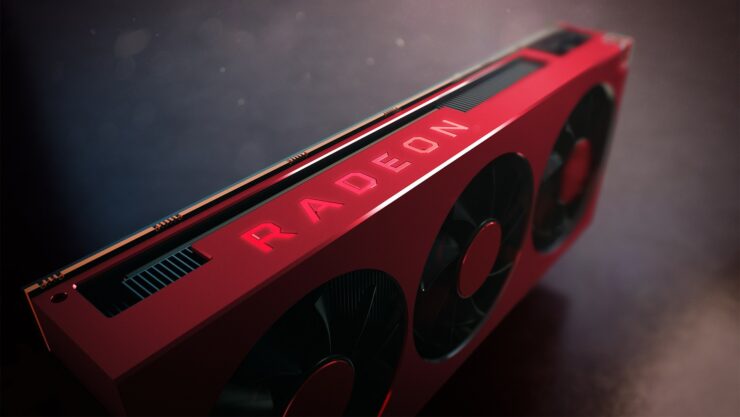 The quarterly research report by Jon Peddie Research has revealed that AMD GPU shipments surged 22.6% in the fourth quarter of 2019, while NVIDIA and Intel did not fare so well. JPR is one of the most well-known names in this segment, and it is not really surprising seeing AMD gain market share in Q4'19, considering our own surveys showed a similar trend and affinity for Radeon GPUs. This impact is likely from AMD's 7nm Navi GPUs which were announced back in late 2019.

Intel "GPU" shipments are usually tied to the sale of their processors (doi) and considering they have essentially run into a supply bottleneck, it is not surprising to see flat growth in shipments. Interestingly, however, NVIDIA was down 1.9% - which is probably because their Turing lineup is expensive and affordable only as far as the non-RTX series goes.

With AMD reaping the benefits of the 7nm node, it was only a matter of time before a switch to red started to occur in the market. Rumors point out that new NVIDIA GPUs will be launching in March but if NVIDIA misses that timeline, we will likely not see any new graphics cards from the company till August/September - by which time I expect AMD to have clawed a lot more market share from big Green.

AMD is also working on their new RX 5950 XT series flagship (which might be renamed to 6000 series by the time it launches) so we might actually see AMD launch *even more GPUs* before either Intel or NVIDIA can get in a say. Intel is expected to formally enter the dGPU market in 2020 with their Xe series parts. TGL is also expected to make quite a bit splash since its a console-level GPU in a CPU.

Here are some of the highlights from the report:

Fourth-quarter GPU shipments are typically flat to up compared to the previous quarter, Q4 2020 saw an increase in shipments.

Jon Peddie, President of JPR, notes “This is the third consecutive quarter of increased GPU shipments, However, Q1 which is seasonally flat to down may show an unusual dip because of supply chain interruptions from China due to the Coronavirus epidemic. 2020 is going to be a game-changer with Intel’s entry into the discrete GPU market and a possible fourth entry by an IP company.”

GPUs are traditionally a leading indicator of the market since a GPU goes into every system before the suppliers' ships the PC, most of the semiconductor vendors are guiding down for next quarter, by an average of -9%. Some that guidance is based on normal seasonality, but there is also a factor for the Coronavirus impact.

A total of 93 million units were shipped in Q4'19 which decreased by one million units from the same quarter a year ago indicating the market is down on a year-to-year basis. However, this is the third quarter in a row of increased GPU shipments incrementally.

GPUs are traditionally a leading indicator of the market, since a GPU goes into every system before it is shipped, and most of the PC vendors are guiding optimistically for next quarter. Their estimates average to a 7% increase.

JPR also publishes a series of reports on the PC Gaming Hardware Market, which covers the total market including system and accessories, and looks at 31 countries.

JPR’s Market Watch is available now in both electronic and hard copy editions and sells for $2,750. Included with this report is an Excel workbook with the data used to create the charts, the charts themselves, and supplemental information. The annual subscription price for JPR's Market Watch is $5,500 and includes four quarterly issues. Full subscribers to JPR services receive Tech Watch (the company's bi-weekly report) and a copy of Market Watch as part of their subscription.

Click here to learn more about this major report, or to download it now. Or, for more information, call 415/435-9368 or visit the Jon Peddie Research website at www.jonpeddie.com.

Contact Robert Dow at JPR (Robert@jonpeddie.com) for a free sample of TechWatch.