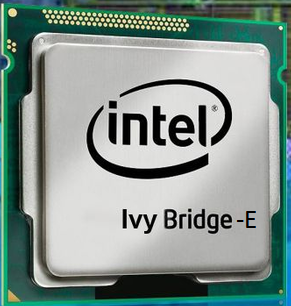 Intel has just released its high end enthusiasts platform Sandy Bridge-E Platform this week which supports the Next Gen Core i7 3000 Series Processors and details have already started to emerge on Intel's Next Upcoming Enthusiast based platform codenamed Ivy Bridge-E.

According to a recent slide by Intel, Intel's Next Gen High-End platform "Ivy Bridge-E" would be compatible with the current LGA 2011 Socket and the X79 Express Chipset. The compatibility would ensure longevity of the LGA 2011 Socket Motherboards.

The new Ivy Bridge-E Processors would be available in 6-8 Core models featuring a 22nm design and would arrive in late Q4 2012. Ivy Bridge on the other hand would also be compatible with the LGA 1155 motherboards based on the Z68 chipset however to gain maximum potential of the new processors, Intel would also launch Z77, H77 Chipset based motherboards.