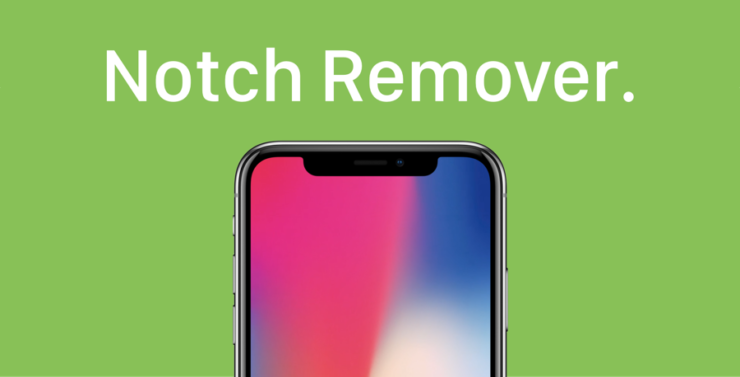 What do you know! Someone out there isn't fond of the iPhone XS notch at all. So much in fact that it forced a particular developer to create an app to get rid of it.

The Notch Remover App for iPhone X Lets You Create Wallpapers That Mask the Notch on the Home or Lock Screen.

The notch on the iPhone X, the area on the screen where the camera and Face ID sensors live, is here to stay. And how polarizing it may seem, Apple is asking developers to embrace it too. But one particular software creator does not agree with the notch at all. In fact, the disagreement is so tense that it forced them to create an app called 'Notch Remover.' While, of course, it may not magically dissolve the notch on the iPhone X, but it does a sly little trick to hide it.

The Notch Remover app is basically a simple solution for creating a wallpaper that adds a black bar on top of any wallpaper, allowing you to hide the notch. In case you are wondering what we are talking about here, just have a quick glance at the app's screenshots below, along with the apt description too.

Notch Remover lets you remove the notch from the status bar! Notch Remover modifies your wallpaper to adjust for the notch. Check out some of the amazing results in the screenshots!

The Notch Remover app is not free and will set you back a dollar if you wish to download it right now. It's also surprising that the app wasn't rejected by Apple in the first place as it directly mocks the iPhone X from Cupertino. Now that the software is widely known, there is a possibility that it would force Apple to take action against it and remove it altogether.

So, just tap on the link below and you will be taken straight to the App Store in order to download the app. But be warned, there's no telling whether or not this app is here to stay or not. Decide quickly how you want things to be.