The iPhone 6s and iPhone 6s Plus have been officially revealed to the world, and naturally, all attention will now turn towards the next big thing - the iPhone 7. 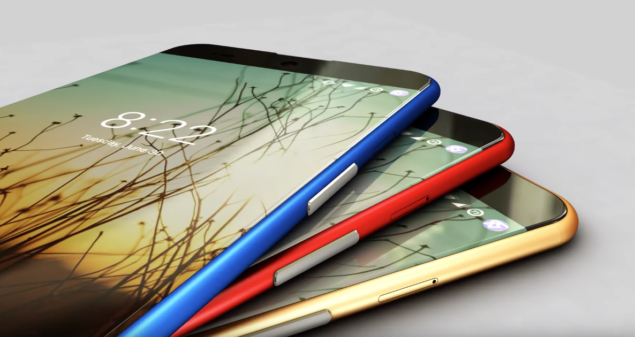 While the iPhone 7 won't see the light of day until next year, but nonetheless it's going to be an amazingly huge release, unlike the iPhone 6s which saw a bump in internal hardware while keeping the design aesthetics from last year absolutely the same.

Designers however, are hard at work these days visualizing what Apple might have in store when it walks up to the big stage next year. And today, we've come across a new iPhone 7 concept, and we have to say, it does look quite stunning, if you ignore the insanely bright color options.

Aesthetically, the device looks absolutely pleasing to the eye, and while we've seen iPhone 7 concept renders in the past as well, this one is our favorite due to its immensely sleek profile. We would've loved the design even more if the designer had the foresight to imagine the concept in sliver, space gray, gold and rose gold, instead of blue red and gold. But still, the color options alone shouldn't be the culprit that would kill the the entire hard work put in place.

On the display end, the designer imagines a 2K Retina panel, which should be more than enough to bring on-screen content to life. Lastly, the designer also imagines the iPhone 7 to come packed with wireless charging capabilities, and while Apple has steered way clear of the technology for a long, long time in its smartphone lineup, it's quite possible that the Cupertino company will surprise everyone with the release of the iPhone 7.

The iPhone 7 concept from today is rather brief if you're asking us, and we would've love it more if the designer went a little more into detail regarding the specs of the device. But still, it's a great piece of work, and we encourage everyone to check it out below:

Coming back to the real world, Apple announced the iPhone 6s and iPhone 6s Plus at its big 'Hey Siri' event on the 9th of September. And while the current flagships are packed to the rafters with technology which we couldn't dream about until lats year, we're way too excited to see which route the company will take next year and what sort of surprises it will throw into the mix.