We've been hearing several iPhone 6S rumors over the past couple of days, which range from specifications on Apple's upcoming flagship, to its design. By the looks of things so far, the iPhone 6S Duo won't be coming with any major design changes from last year's flagships, but several specification upgrades can be expected. A pink iPhone has also been rumored over the past couple of days, and courtesy of China's Weibo, we can now take a look at what to expect from this year's 'pink' upgrade. 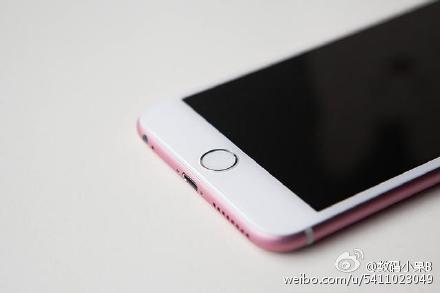 China's blogsphere has gotten busy today folks, and we've started to see several images of the much rumored about pink iPhone start to surface. Keep in mind that pink is a color option that has been rumored for quite a while to be coming on Apple's flagship smartphone series, with last year's iPhone 6 Duo also seeing such rumors surface. So before we get into the details, its relevant to ask whether the iPhone in pink will indeed be coming this year? Several quarters would like to see this happening for sure.

As far as the design details of the pink iPhone 6S go, it looks exactly as we've been hearing so far. The pink frame of the device are to be matched by a white screen, coupled with white antenna bands. Overall form of the device remains at a bare minimum thickness, as should be expected from Apple's flagship. If these images are accurate then we could very likely be seeing another iPhone color option coming this year, apart from gold, silver and gray currently found on Apple's roster. Interesting? Let us know what you think in the comments section below. We'll keep you updated as this develops. It won't be long till be get to see this year's iPhones anyways. Cheers.