We all knew that iPhone 6s and iPhone 6s Plus were going to be a force to be reckoned with but with the latest benchmarking leak, the upcoming smartphones show that Apple will pack sufficient firepower in them.

iPhone 6s Benchmark Score Blows Exynos 7420 Out Of The Water, And Narrowly Zips Past Another Unreleased SoC

According to a leakster hailing from China, both iPhone 6s and iPhone 6s Plus will be sporting the same screen sizes as their predecessors, but the notable difference separating these two generation of handsets will be their resolutions. According to the leaked images (which you will be able to see below), the upcoming handsets are going to sport the following resolutions:

While these are slightly lower than the resolutions being radiated by Samsung’s Galaxy S6 and Galaxy Note family, we should keep in mind that thanks to more efficient chips such as Apple’s A9 SoC, the company can resort to incorporating smaller capacity batteries. However, with this latest revelation, we are not so sure about this anymore. Looks like we are going to have to find out what the tech giant really has in store for us when its event kicks off on September 9th.

Now, coming to the highlighted segment of this leak; the performance that we can expect from iPhone 6s. According to the benchmarking scores obtained from the Geekbench application, the upcoming smartphone was able to achieve the following scores: 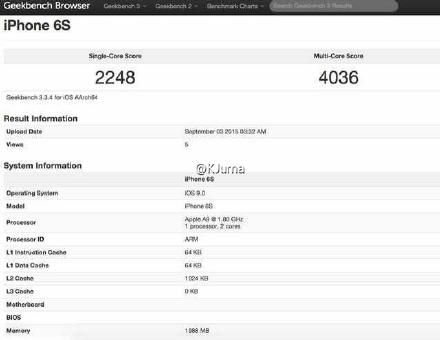 Despite the fact that the leaked score shows that A9 is going to feature two cores running at a speed of 1.80GHz, the device is still able to obtain such a high score, particularly in the single core test. Not long ago, we were also able to get our hands on the leaked Geekbench scores of Samsung’s upcoming mobile chipset, Exynos 7430 Hero. Even though the chipset excels in the multi-core chipset, the cores present in Apple A9 make short work of Samsung’s developed SoC by hammering it in the single-core test, showing the prowess of what a single processing core is capable of. After all, Apple mobile platform has shown that more cores do not necessarily equal better performance.

Naturally, we will be treating this benchmarking leak with a grain of salt and wait for the actual benchmarking results to come forward so that we are able to present a conclusive analysis on which is the fastest chipset so far. For now, all eyes are going to be set at iPhone 6s, since we are expecting a mobile powerhouse to be showcased in the near future.