Tomorrow's the big day of Cupertino's keynote and the hype surrounding the new iPhone 6s and iPhone 6s Plus is at an all-time high. With many leaked details about the device already out in the wild, it's just a matter of time Apple takes the wraps off the new iPhones and reveal to the world what it has in store for the year to come. 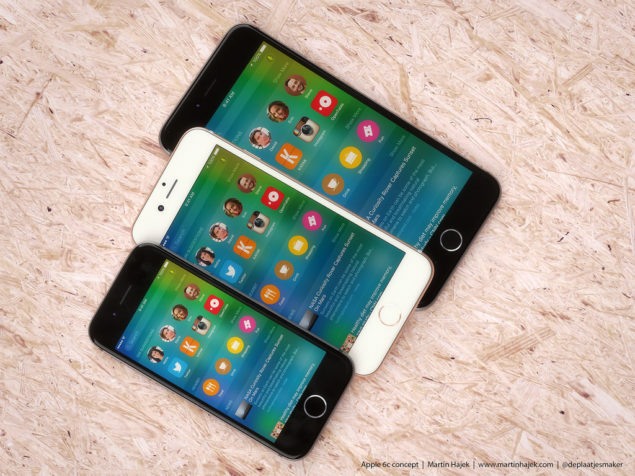 According to a number of reports floating around in the wild, the iPhone 6c, the successor to the iPhone 5c, will be a no-show at tomorrow's keynote. Many reports suggest that the device will be launched later this year, and will likely see a soft launch like the iPod touch 6, with the device being wrapped around an iPhone 5c like shell but will come packed with more powerful internals.

But that doesn't stop concept artists from imagining what Cupertino's smartphone lineup will look like if the company decides to throw in the iPhone 6c into the mix.

4-inch iPhone 6c With A Metal iPhone 6 Like Body? We're Sold To The Idea Already!

Today's concept comes in from Martin Hajek, and the man himself imagines the iPhone 6c as a repackaged iPhone 6 but with a smaller 4-inch display. And we have to admit with all our hearts - the device looks absolutely brilliant in a lot of ways. Take a look for yourself down below:

The iPhone 5c wasn't a success by any means, and Apple released the handset to compliment the iPhone 5s two years ago, hence in that regard, the device somewhat served its purpose well. And while many believe that the iPhone 6c will be a plastic offering just like its predecessor, today's concept really makes us wish if Apple goes with an all-metal and glass design, if it does plan on releasing the device at all. Face it, the device looks stunning in a smaller iPhone 6 body, doesn't it? We're sure you agree with us on that one.

Apple's big keynote kicks off tomorrow at 10am PDT, and we'll be covering the event live and will bring to our readers all the announcements as they unfold, so stay tuned to our coverage tomorrow.

- What To Expect From Apple’s ‘Hey Siri, Give Us A Hint’ September 9th Event