Well we have always wanted a smartphone with a thumb print scanner. Remember those fake apps in which you scanned your thumbs using the touch screen. Well the iPhone 5s not only makes it a reality but in an even better way, as rumored the Home Button is actually a thumb print scanner! 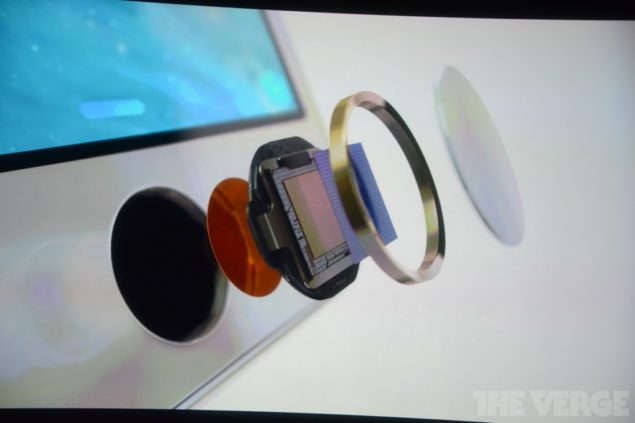 Photo Credits Only: The Verge

iPhone 5S Thumbprint scanner is basically a TouchID Based Capacitive scanner with a 500ppi resolution and 170 microns thickness. the scanner read in all angles and because it scans your sub epidermal layer it wont be much affected by slightly dirty skin. However it does raise the very obvious question. What if you cut your thumb? are you locked out of your iPhone 5s till you heal? Lets Hope not!

The Basic Design of the scanner goes like this: The home button houses the iPhone 5S Thumbprint Scanner scanner and a detection ring. Both are protected by Sapphire Crystal so it wont scratch (If it does any further thumbprint impressions would be invalid.). Basically the detection ring will trigger the Touch ID system which will use the sensor to scan your thumbprint and verify it against a set database, effectively giving you a thumbprint scanner.

""You can simply touch your home button to unlock your phone."" This Appears to be the moto behind the added security features: Enhanced security with reduced effort. The Thumbprint scanner in the iPhone 5S is capable of handling multiple fingerprints and is able to encrypt them all to secure your most precious security authentication device.

Apple further goes on to elaborate that the Touch ID system never backs up the date, it never stores you encrypted thumbprint anywhere on the Apple Cloud and neither is it ever available to any other application. The iPhone 5S Thumbprint Scanner security seems pretty solid although only time will tell whether its effective or not.