Apple has finally announced the hotly anticipated iPad Pro at the Bill Graham Auditorium, today. For over two years now, we have been seeing a multitude of rumors coming from Cupertino hinting at Apple working on a larger-sized tablet catering to power users of business and education markets. Lo and behold, as Apple has finally taken the wraps off the 12.9-inch iPad Pro.

"The biggest news in iPad since iPad"

Introducing it like the preshus ring forged in the Mount Doom, it seemed like Tim Cook is really a big fan of Lord of the Rings. Following are all the iPad Pro details along with its accessories as they unfold.

Specs at a glance:

Bringing forward the design ideology of iPad Air 2, 12.9-inch iPad Pro features a 2732 x 2048 display encased in a thin bezel. 5.6m pixels make it look even better than a Retina MacBook Pro display. Similar aluminum back with curved edges and a FaceTime camera on the front with an iSight camera on the back finishes the iPad look. From the design, it looks like iPad Pro is really nothing but a larger iPad as it fits in very well with the rest of the iPad Air and iPad mini models. iPad Pro is only 6.9mm thick compared to 6.1mm thickness of iPad Air 2, weighing at 1.57 pounds. The width of the iPad Pro is same as the height of the iPad Air 2, which clarifies how users will be able to run full-sized apps, side by side.

Apple is powering the iPad Pro on an A9X chip which will offer improved performance and experience when compared to A8X fitted inside iPad Air 2. The new A9x is 1.8 times faster than the A8X, giving "desktop class" of performance and 2x better graphics performance, for "console-class" performance. Apple's Phill Scheller proudly quipped, "our chip team is just on fire."

Apart from these, iPad Pro also includes Touch ID, new high-fidelity four-speaker audio system (automatically adjusts the orientation of the frequencies according to how you are holding it), an 8-megapixel iSight camera, 10-hour battery life, and support for LTE. That's not all though, as there's even more... 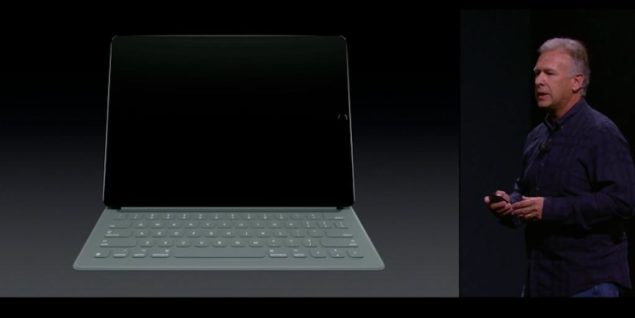 iPad Pro is supplemented with an optional keyboard accessory that also acts like a cover. Looking somewhat similar to the keyboards we have seen with Microsoft's Surface series, Smart Keyboard uses key domes that were first showcased with the new MacBook launched earlier this year. Smart Keyboard connects to the iPad Pro using a "Smart Connector" that carries power and data to the keyboard - yep, no Bluetooth connection.

The iPad Pro also sports a stylus accessory called Apple Pencil. Building on different pressures, stylus will help users avail enhanced capabilities of drawing and design apps. This integration between the display and the stylus is something that takes the tablet apart from others in the range. Working differently based on the levels of pressures, users will be able to accomplish much more than just tap and swipe. What's surprising is that you can use the Apple Pencil simultaneously with your finger on the display. 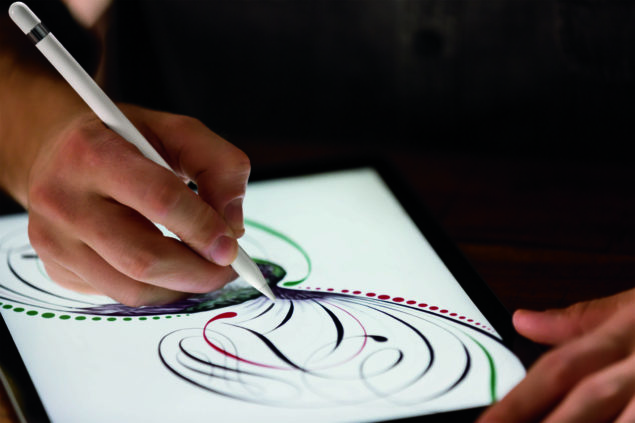 When you use the Pencil with the iPad Pro, your tablet will increase the amount of scanning on the surface to improve accuracy. The Apple Pencil has sensitivity sensors which means different pressure levels result in different tasks like brief strokes or wider strokes. Apple Pencil can be recharged using a Lightning connector plugging directly into the iPad pro.

Apple is also talking about optimized apps - like a new Notes app - that are designed specifically to take benefit from the new Apple Pencil tool. In these apps are also included Microsoft's Office suite. Apple seems to be supporting Microsoft "today more than ever" as it has worked with Microsoft to make Office for iPad better than ever before. Creating rich documents with touch appears to be the goal here. Apple invited Microsoft on stage to demonstrate new versions of the Office for iOS apps supporting Apple Pencil. Along with Microsoft, Adobe also joined Apple on the stage to demonstrate several apps like Adobe Photoshop Fix and Adobe Sketch.

The iPad Pro will ship with iOS 9, which will include special features for the larger tablet. Optimized versions of Split-Screen apps, Picture in Picture, video playback, and an improved Notification Center are some of the highlights of iOS 9 for iPad Pro. New ways to multitask on iPad and new QuickType features will make multitasking, formatting and text selection even easier than before.

iPad Pro will be available in Gold, Space Gray and Silver. Nope, Apple is not offering the 12.9-inch tablet in the Rose Gold option.

Considering the larger screen real estate that iPad Pro is offering, usage will be more at the notebook-end than like a typical tablet which is treated much like a larger smartphone. To deal with the amount of storage that a user will require, Apple is starting the storage right from 32GB. Following are all the storage options that you will be offered with: 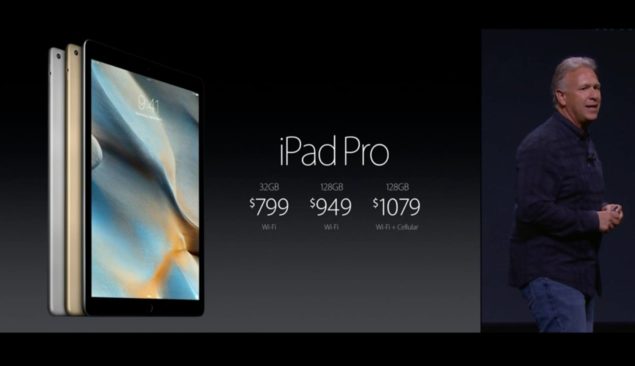 There will also be a 128GB variant, but no 16GB or the much-wanted 64GB storage choices anymore with the MacBook-sized tablet.

The iPad Pro and its accessories will start shipping in November, with pre-orders to begin at the end of October. Considering the fact that Apple is collaborating with enterprise partners like IBM and Cisco, company may want to have a longer lead time between today's announcement and the launch to market it to enterprises. We heard about these partnerships only a week ago when announced them officially:

With Apple’s support, Cisco will deliver experiences specially optimized for iOS across mobile, cloud, and premises-based collaboration tools such as Cisco Spark, Cisco Telepresence and Cisco WebEx in order to deliver seamless team collaboration and reinvent the meeting experience.

This will also help developers optimize their apps for the larger screens, creating a good market of apps ready before the tablet actually hits the shelves.

That's it, folks. Let us know if you are impressed with this new and the largest iPad introduced by Apple. Falling in love with Apple Pencil or more in for the Smart Keyboard? Don't forget to share your thoughts with us.