A design flaw is certainly not synonymous with the near perfect Apple devices we all love and adore. However they're not impossible. Time and again, owners of the New iPad have complained of overheating issues. The issue was big enough to draw criticism from Consumer Reports. It is now being reported that Apple might tweak the design of New iPad in order to put this overheating issue to bed once and for all. 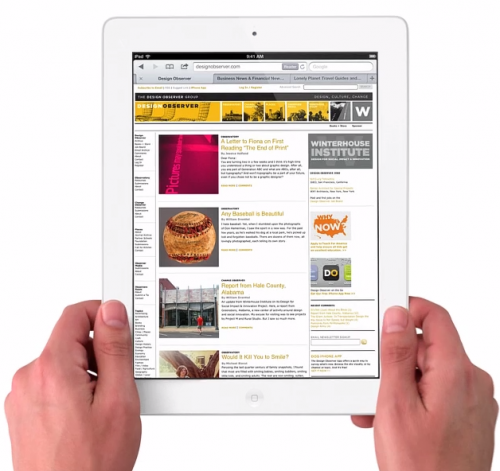 The New iPad was unveiled earlier this year in March. The third generation tablet comes with no significant design changes. All of the changes have been made under the hood, as this tablet touts a dual-core A5X processor. The battery provides the same legendary 10 hour battery life. This iPad comes with retina display, which really is an amazing leap in display technology of tablets. However, the initial package seems to be encountering problems, as a large number of users are facing overheating issues.

According to Digitimes, a trade publication that has a massive hit or miss record when it comes to rumors, Apple is working on a slight design teak of New iPad. This tweak will comprise of a reworked LED backlight and a revised battery. The lens is also rumored to be enlarged, though no specific reason has been cited for this. According to this rumor, these tweaks can make the New iPad slightly thinner and lighter than the initial one.

The same sources claims in another report that Apple might revert back to single LED backlight in order reduce emission of heat. Currently the New iPad flaunts a dual-LED bar. This was put in place because of the Retina Display. Since dual-LED bar emits more heat, reverting back to singe LED could significantly reduce the overheating issue. Its said that a single LED backlight will not have any effect whatsoever on the Retina Display, which is one major selling point of the New iPad. These tweaked iPads are also expected to tout Sharp's IGZO panels, which were previously disapproved by Apple because they did not meet quality guidelines.

These reports should be taken with a pinch of salt though. This source has a bumpy track record, and is usually not right about rumors. Nevertheless iPad users would definitely welcome the elimination of overheating issues. It remains to be seen what Apple will decide to do with early adopters. It might just end up trading New iPads for the latest, tweaked versions.

Apple Rumoured To Be Releasing A New iPad This Summer