iPad mini releases mysteriously before the perpetrated date. News was coming in regarding the display on the iPad mini being faulty and the manufacturers not producing units up to the mark. It looks like Apple was swift in routing the problem as the iPad mini is released. U can get yours from he official Apple store or via third party stores. It starts at $400 a piece.

To counter the display problem it was learned that Apple contacted Samsung to fulfill the demand of the retina display. The Ram on the previous iPad mini was 512 MB. This was considered slightly low even when considering the fact that iOS does not require large amount of RAM. At first there was no doubt that the iPad mini retina would house 1 GB of Ram But according to reports it has the same amount of Ram as its predecessor. A Chinese retail site which is a Apple certified seller is displaying the Ram on the iPad mini retina to be 512 mb. 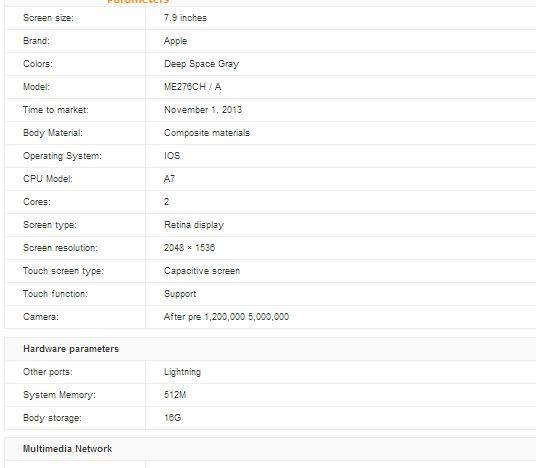 Although the processor used in the mini retina is extremely powerful and similar to the one used in the iPad Air and the iPhone 5s, the Ram amount reportedly is half. As the iPad mini retina just released today it will be better to wait for someone to benchmark it or better yet, tear it apart and physically confirm the amount of RAM. Until then stay put.