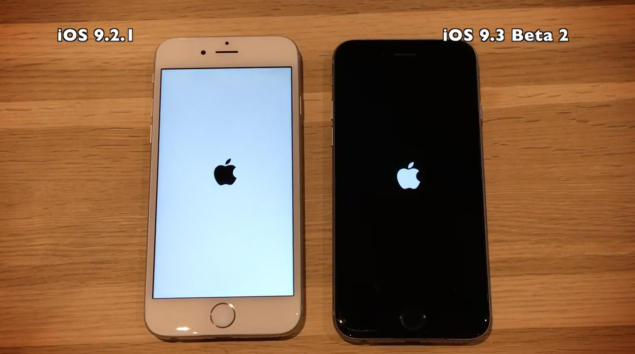 Apple quietly pushed out iOS 9.2.1 download a few days back to the general public, and the release featured no new additions at face value, but did bring to the table some bug fixes, security patches and performance enhancements, especially for older iPhone models. In other words, the update was a minor one if you do not lift the hood and see what's underneath.

On the other hand, Apple pushed out iOS 9.3 beta 2 to developers a few days back, while also seeding the second pre-release build to public testers just yesterday. Unlike iOS 9.2.1, iOS 9.3 is a feature-rich update, and comes with a lot of new additions and a ton of tweaks around corners. So, keeping that in mind, we're certain that at this point our readers must be wondering how does iOS 9.2.1 compare to iOS 9.3 beta 2 in terms of performance. Given that the latter is still in its beta phases, it's surprising to note that Apple has made huge strides in the performance department. And to prove that, YouTube user iAppleBytes has recorded a series of videos, pitting iOS 9.3 beta 2 against iOS 9.2.1, running on several different devices, namely iPhone 6, iPhone 5s, iPhone 5 and the trusty old iPhone 4s.

The results? Take a look for yourself below:

While none of the firmware versions will win any sort of World Cup in terms of who is better overall, but it's safe to say that iOS 9.3 beta 2 is not at all bad in terms of performance, given that it's still in beta stages, like we mentioned above.

The final build of iOS 9.3 is still weeks away, and Apple is without a doubt working hard in the background to make sure that things are as polished as possible, especially for older iPhone users, given that past builds of iOS are greatly known to cripple devices to a point where they are left almost unusable.

Lastly, if you want to give iOS 9.3 beta a shot on your iPhone, iPad or iPod touch right away, then you'll be pleased to learn that you do not have to be a registered developer with Apple in order to do so. Simply point your browser to beta.apple.com and get started with the installation process. And remember, it's highly advised that you give iOS 9.3 beta a shot on spare hardware rather than your primary one.

It's beta software after all!