Apple has updated its developer website to highlight the current adoption rate of its mobile OS, with iOS 9 sitting at the top with 66% install base, and iOS 8 sitting at 25%, while the remaining stands at 9% worldwide. It's worth mentioning here that it was just last month iOS 9 broke past the 60% adoption rate barrier. Today's number goes on to show that iOS 9's user base is continuing to grow, and with Apple continuously working in the background to improve its mobile OS across the board, it's safe to say users will definitely upgrade one day or the other. 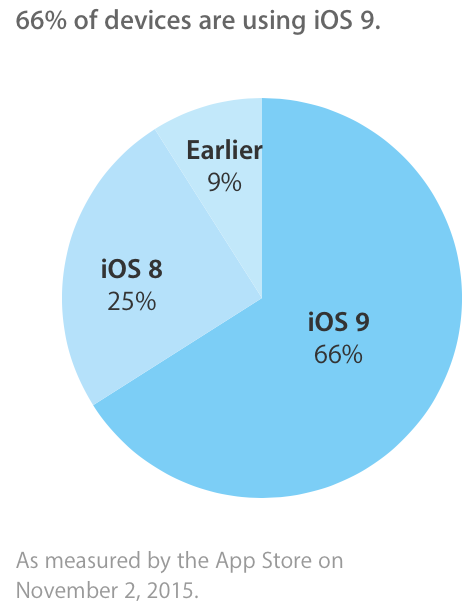 iOS 9 saw a sudden spike in adoption rate as soon as the Pangu Team released the first ever untethered jailbreak in the form of Pangu 9. But sadly enough, Apple acted in a swift manner to patch the whole thing with the release of iOS 9.1 download. Even with the jailbreak patched up, users still updated to iOS 9.1, all thanks to the introduction of new emoji characters, with a middle finger one being one of them. But still, given that iOS 9 is a brand new OS packed with features that have never been seen before on a mobile device, it's obvious that people would want to upgrade to keep things fresh.

If you're looking to install iOS 9 on your device right away, then you can jump onboard the bandwagon with minimal fuss. Simply follow our detailed guide posted here on how to get up and running with iOS 9.x on your device: How To Download / Install iOS 9, 9.1 On iPhone, iPad, iPod touch The Right Way.

If you're sitting on iOS 9.0.2 right now and are wondering if you should jailbreak or not, then you can do by following our detailed guides posted below. Remember, you can't un-jailbreak your iOS device without restoring it to iOS 9.1, which subsequently means that you won't be able to downgrade your device to jailbreak once again.

Are you one of the many who installed iOS 9 on their device? If no, then be sure to let us know in the comments section why you didn't make the jump. We love hearing back from our readers!