Apple released the new iOS 9.3 beta to developers for testing earlier this week. Public beta testers also received the new firmware update for their iPhone, iPad and iPod touch devices yesterday. As iOS 9.3 is considered to be the first major update after the release of iOS 9, there is a lot of attention focused on the first released beta. The new OS beta brings some impressive features like the Night Shift mode that everyone is excited about. It also brings 3D Touch Quick Actions for stock apps like Weather, Mail along with some CarPlay improvements among other smaller changes and optimizations. 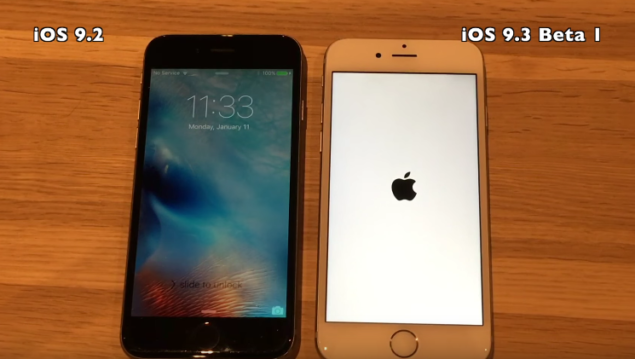 While the first beta seems quite promising, how well does it actually perform? Apple is not really famous for speeding things up with its major OS updates as these are often optimized for performance with later, iterative releases. Will iOS 9.3 also fail to deliver speedy performance or will it surprise us with exciting new features and amazing performance? With developers and public beta testers now testing and experimenting with the new release, there are also some speed tests going around. Remember that this is just a beta release, which are often a lot slower than the final releases. Apple's iOS 9.2.1 beta, also in testing, offered some speed boost over the iOS 9.2, giving hope that the latest release might also offer improved performance when compared to iOS 9.2. However, that's apparently not the case.

The iAppleBytes YouTube channel is offering some perspective to this curiosity as it has released quite a bunch of videos of iOS 9.3 beta 1 vs iOS 9.2 performance. The channel has compared the two OS versions on iPhone 4s (now popular for receiving iOS 9 updates that slow it down), iPhone 5, iPhone 5s and iPhone 6. The latest beta seems to be a tad slower at loading some apps, including the App Store, when compared to iOS 9.2. iOS 9.3 is noticeably slower on older iPhones, including the iPhone 4s and iPhone 5.

If you are trying out iOS 9.3 beta 1 on your own devices, let us know how it performs on your iPhone, especially the iPhone 6s and iPhone 6s Plus.